1442429976 (10)
978-1442429970 (13)
SpongeBob's Runaway Roadtrip is a SpongeBob SquarePants book based on all the episodes in the vacation miniseries: "A SquarePants Family Vacation," "Mr. Krabs Takes a Vacation," "Mooncation," "Walking the Plankton," and "Patrick’s Staycation." It was written by Veronica Paz and illustrated by Dave Akins. It was published by Simon Spotlight/Nickelodeon on August 30, 2011 and contains 24 pages. 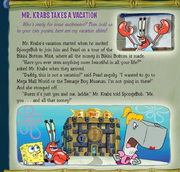 Add a photo to this gallery
Retrieved from "https://spongebob.fandom.com/wiki/SpongeBob%27s_Runaway_Roadtrip_(book)?oldid=3128780"
Community content is available under CC-BY-SA unless otherwise noted.