SpongeBob's Pest of the West

Gather 'round for a tale 'bout SpongeBuck and Dead Eye Gulch. Then SpongeBob battles a stubborn stain, Mr. Krabs puts Patrick to work, SpongeBob and Patrick mistakenly board a boat hauling inmates to prison, and more!

Gather 'round for a tale 'bout SpongeBuck, a newbie who blew into Dead Eye Gulch fixin' to be the new fry cook only to find himself sheriff and goin' face-to-face, well, back-to-back since it was a duel, against the town's most dastardly denizen, Dead Eye Plankton. Can good triumph over evil in the Old West? Can a sponge make it in a town when he's outta food, water and lip balm? Find out in the double episode, Pest of the West! And while we got your attention, take a gander at The Krusty Plate, when SpongeBob won't leave work until he gets a stubborn spot off one of the dishes. Then see Mr. Krabs put Patrick to work, SpongeBob and Patrick mistakenly board a boat hauling inmates to prison, Sandy tricking SpongeBob and Patrick into attending survival-training camp where the creed is ‘eat or be eaten,' Mr. Krabs talking SpongeBob and Patrick into using an old submarine to take the Krusty Krab on the road, and choose your side in The Battle of Bikini Bottom.

"Pest of the West" shorts 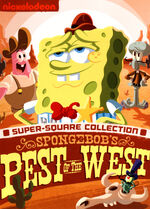 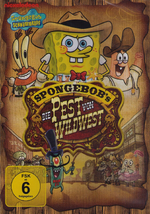 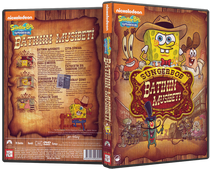 Turkish release cover and back 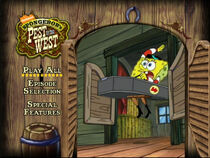 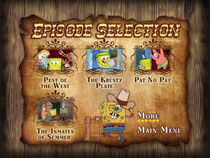 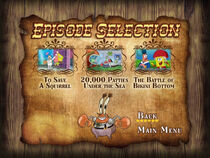 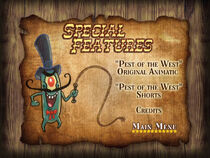