July 18, 2011
SpongeBob's Last Stand is a SpongeBob SquarePants DVD that was released on March 16, 2010 and contains six episodes from season 6 and one episode from season 7. It is based on the episode of the same name.

Paul Mavis of DVDTalk called this DVD in a review of it, "a well-crafted entry," with calling the episode in it "solid, as well, providing plenty of laughs and gross-out humor."[1] 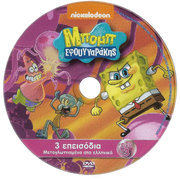