"Back to the Past"
"SpongeBob's Last Stand" is a SpongeBob SquarePants episode from season 7. In this episode, Jellyfish Fields is threatened by the construction of a highway.

The episode begins at Jellyfish Fields, SpongeBob then takes a moment to realize how lucky he and Patrick are to be among the jellyfish. They take the time to pay tribute and sing "The Jellyfishing Song." Patrick then notices a large billboard and points it out to SpongeBob. They read the sign and find out that the Shelly Superhighway is going to be built over Jellyfish Fields, so SpongeBob goes into town alone, trying to stop the destruction of Jellyfish Fields.

No one listens, so SpongeBob goes to work, very sad. Mr. Krabs says he is actually supporting the construction of the highway, much to SpongeBob's dismay. He explains that he will get more customers if the highway is built. SpongeBob discovers that Plankton is the founder of this highway and that his plan was to build over the Krusty Krab to run them out of business. The ending of the highway leads to the Chum Bucket to steal all the customers that Mr. Krabs once had.

SpongeBob and Patrick then pass out flyers and sing "Give Jellyfish Fields a Chance," trying to get Bikini Bottom to save Jellyfish Fields. They find out that people are on the highway's side when they are pelted with their own flyers. Nat then tells SpongeBob and Patrick that the highway is what everyone wants by crushing the tambourine that Patrick was playing as part of the song.

The police then come and control the riot, arresting SpongeBob and Patrick because the former did not have a license on his sitar (actually resisting the highway project). The police then throw them out in the middle of nowhere. During this time, Patrick remembers what his Great-uncle Cletus said before he was arrested in a Freedom March and urges them to continue to support Jellyfish Fields.

After they are abandoned, they think a parade would get people to go down with the highway, but as soon as they are brainstorming, a parade for the highway passes by, followed by Plankton, with a paver to build the highway. SpongeBob tries to stop him, only to be crushed by the paver while Patrick plays the trumpet. All the life is sucked out of Jellyfish Fields as well, causing all of the jellyfish to retreat.

Just as Mr. Krabs is about to sell the formula to Plankton, Mr. Krabs flees as Plankton is grabbed and stung by the jellyfish and news broadcast this coverage about it until one of the fish starts unnecessarily waving at his relatives, must to the reporter's annoyance. Seeing an opportunity, SpongeBob uses this chance to convince the Bikini Bottomites to restore Jellyfish Fields through a news broadcast. Everyone still opposes until SpongeBob asks if they were kidding, which they confirm. Soon, SpongeBob rides Plankton's paver in an attempt to demolish the highway, but it does not budge. A severely stung, but still standing, Plankton appears and gloats that his highway is indestructible. However, the Bikini Bottomites turn against Plankton and help SpongeBob by pushing the paver, giving them enough momentum to unpave the highway and restore Jellyfish Fields. Panicked, Plankton tries to stop it, but is crushed by the paver. As SpongeBob and the Bikini Bottomites destroy the highway and columns pavement. 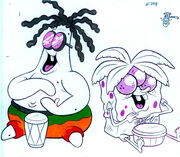 Nickelodeon officially announced the episode on a press release on April 5, 2010. According to the network, "SpongeBob and Patrick learn the 'Shelly Super Highway' is coming to Bikini Bottom - right through Jellyfish Fields! They must find a way to galvanize their neighbors, or it could be the end for Jellyfish Fields forever."[2]