With sleep comes dreams. What mischief can be found in this subaquatic, somnambulant realm?

After SpongeBob falls asleep in Bikini Bottom, he finds himself surrounded by the "dream bubbles" of other characters: Sandy (where she is playable), Squidward, Mr. Krabs, and Patrick. Gary tells him that there are Golden Spatulas to be found, so after trying on a mustache, SpongeBob presses on through each dream bubble.

There are eight Golden Spatulas to earn in SpongeBob's Dream. Five of Patrick's socks are hidden here.

Music is in the Ear of the Beholder

SpongeBob's Dream in the original Battle for Bikini Bottom 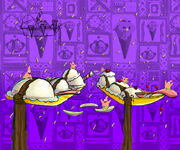 Retrieved from "https://spongebob.fandom.com/wiki/SpongeBob%27s_Dream?oldid=3510547"
Community content is available under CC-BY-SA unless otherwise noted.