Encyclopedia SpongeBobia
Register
Don't have an account?
Sign In
Advertisement
in: Articles in need of cleanup, Episodes, Season 12 episodes,
and 3 more
English

"SpongeBob in RandomLand"
"SpongeBob's Big Birthday Blowout" is a SpongeBob SquarePants episode from season 12. In this episode, SpongeBob and Patrick tour the surface world, while the rest of Bikini Bottom prepares a surprise party for SpongeBob.

In Encino, California, Patchy the Pirate is struggling to start his boat. He tells the audience that he has a present to deliver to SpongeBob on his birthday. Potty tells Patchy that the boat is out of gas, but is ignored. Potty triggers the boat's airbags, causing Patchy to be launched out of the car into his garage. He decides to walk instead and follows the direction of the wind with a sail on his hand.

Down in Bikini Bottom, SpongeBob is woken up by his alarm clock and sees Gary singing him a happy birthday. He opens Gary's present to see a jellyfish net made out of Gary's slime. SpongeBob loves it and plays with it, causing bits of snail slime to fly across the room, and some it even into Squidward's coffee next door. At Patrick's house, we see that Sandy, Bubble Bass, Mr. Krabs, Plankton, Mrs. Puff, Old Man Walker, and Patrick are planning a surprise party for SpongeBob. Sandy struggles to remind Patrick of his duty, though he continually forgets until he is alerted by a ring on his watch and finally remembers his role. Everyone is shocked at his sudden recollection, though Plankton remarks that idiots have their day.

Plankton hops into Patrick's pocket as he is about to pick up SpongeBob for the tour that is heading towards Surface Land. Plankton grabs the keys to SpongeBob's house. The crew then moves all of his stuff to Squidward's house. Sandy forces Squidward to help out with the decorations. He gladly agrees. Mr. Krabs then assigns Old Man Walker to be the lookout. Meanwhile, Rube is driving to the destination, and he gives SpongeBob a birthday hat, while also telling the tourists the rules.

It turns out that in order to get to Surface Land, they need to get a lift from the French Narrator, which instantly makes Patrick want to get to the nearest restroom. The submarine ends up tilting David Hasselhoff's boat over. Everyone on the tour bus says goodbye to the French Narrator as they get on the beach and see some local human activity.

Their first stop is the Beach Blanket Bean-Go. The host being Beanie McBean, Beanie asks contestants different questions and get covered in bean slime. Patrick watches them getting covered with bean slime and cannot resist; he drives the bus all the way up to the rostrum and says "Wrong answer!" Bean slime explodes and falls into the bus, where Patrick eats all of it, and also soaks up all the water in it.

Rube drives the bus, while he and the passengers are drying up, to a beach shower, and refills the bus with water. Immediately after, the bus gets approached by a dog, which Rube calls a pie dragon. As soon as it starts drinking its water, Rube drives the bus away. Meanwhile, back at SpongeBob's house, there are arguments about the theme by which it should be decorated, until Sandy tells each one of them to decorate a part of the house: Bubble Bass decorates it after a Mermaid Man and Barnacle Boy theme, Plankton after a torture theme, Sandy after a karate theme, Squidward after a painting theme where he puts his paintings in the display, Mrs. Puff after a driving theme, and Mr. Krabs opens a Krusty Krab section to sell Krabby Patties.

Rube is explaining guides the passengers through a forest, they stumble again upon the dog, which runs after the bus. SpongeBob realizes that Patrick, on the surface of the bus' water, has caught with his mouth its frisbee and does not let it go. SpongeBob makes him do so, and the dog stops to catch the frisbee. The bus tour continues as Rube guides the tour passengers through the city.

Back at SpongeBob's house, the party begins as the guests come over. Things do not turn out very well at the house, as some of them break things and impatiently eat the cakes served. Despite Sandy's attempts to calm the guests down, they wreak havoc and two walls of the living room fall apart.

The bus tour visits a lot of places, including a business center in which they watch a meeting partaken by business people wearing gorilla masks, and the Trusty Slab, a restaurant similar to the Krusty Krab as to the employees, the employer and some of its design.

As Rube goes on with the tour, SpongeBob tells him to press the brake; he asks him about an aquarium shop next to the bus. As Rube tells him about the dangers of it, a female stranger mistakes the bus for an aquarium and puts it in the shop.

The bus passengers and Rube are unable to drive away, due to the bus being placed right between two aquariums. Rube and the passengers are then about to sing SpongeBob the Happy Birthday song, but Patrick, out of the bus, pushes it and it falls down before they even begin. As the bus leaves Surface Land along with fish from aquariums of the shop in it, SpongeBob says goodbye to it. Meanwhile, Patchy the Pirate, who is riding a bicycle, struggles to find a way to deliver his present to SpongeBob. He notices Bikini Atoll from his telescope while on the beach and uses the Can-o-Beans cannon to go there.

SpongeBob and Patrick return to Bikini Bottom. Rube and the others try to sing the birthday song for SpongeBob, but are prevented by Rube sending the bus off. SpongeBob and Patrick find Old Man Walker, who was the lookout for the party, but SpongeBob is unaware, and Patrick is too stupid to realize why he is there, so they send him off. SpongeBob then goes into his home, only to find the place wrecked and the guests sleeping but tell him a surprise. Seeing this, SpongeBob is overjoyed by this while Patrick finally remembers that he was in on making the surprise party for SpongeBob and meant to tell the latter, as he yells surprise and goes to sleep too while SpongeBob thanks them. Suddenly, a birthday present falls into Conch Street and SpongeBob opens it. It turns out the head of Patchy is inside it; he wishes SpongeBob a happy birthday and the latter thanks him with a hug. Patchy states he doesn't know what to do now. SpongeBob suggests that he sings the birthday song since he never got it during the day. Patchy agrees and he alongside SpongeBob's waking party guests sing his birthday song.

Various celebrities appear wishing SpongeBob a happy birthday while the song plays, with SpongeBob ending by wishing himself a happy birthday. Patrick then asks SpongeBob his age. As he is about to answer, it cuts to TV static, and SpongeBob plays his nose like a flute. It turns out that SpongeBob got the birthday party he deserved after all. The episode ends by showing a dedication card writing "Thank you, Steve Hillenburg."

The episode was confirmed on January 24, 2019, by Vincent Waller and multiple other sources.[4][5]

The episode was announced to be 44 minutes long.[6] The first clip of the episode was shown during a commercial break of the 2019 Kids' Choice Awards on March 23, 2019. The following day, an extended version of the clip was released to the official Twitter account.[7]

Tom Kenny noted, "I don't want to live in a live-action world. I want to live in the cartoon world." In the episode, he had to perform in character on a Krusty Krab set along with the rest of the voice cast, who were also dressed as their respective characters.[9]

On May 22, 2019, an article from Entertainment Weekly revealed images of the voice cast playing their human forms. Other images revealed that David Hasselhoff was going to be guest starring standing next to Patchy the Pirate.[10]

On June 18, 2019, an article from Den of Geek! revealed that Nickelodeon was going to hold SpongeBob's 20th birthday blowout at Comic-Con.[11]

More promos were released during the following weeks. On July 1, 2019, the SpongeBob SquarePants Official YouTube channel released a 5-minute preview of the episode.[14] 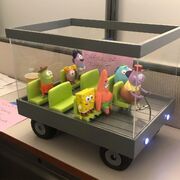