"Handemonium"
"SpongeBob's Bad Habit" is a SpongeBob SquarePants episode from season 12. In this episode, SpongeBob can't stop biting his nails, but he also can't figure out why.

Squidward is complaining about how he hates his work, but nobody listens except SpongeBob, who prepares an order for a customer. As he is delivering it, he starts biting his nails, making everyone disgusted due to the nails getting onto them. Squidward sees this and tells him that biting nails is a bad habit.

Eventually, he meets up with Patrick and tells him about his nail-biting issue. He brings him to Glove World! to resolve this issue, but SpongeBob starts biting the nails of a glove balloon. After getting kicked out, they call Sandy for help. First she puts a helmet on SpongeBob, but he bites his nails from behind his mouth, so she uses a pillory on his fingers. The three fall asleep after a while, but once Sandy wakes up, she realizes SpongeBob has got out and is biting her nails, making her send him to a hypnotherapist.

The hypnotherapist finds out that SpongeBob thinks he is Squidward and that is why he wants to bite his nails. He snaps his fingers and he goes back to normal. It turns out that the hypnotherapist was Hans, who SpongeBob instantly bites the nails of. At the same time arrives Squidward due to his weekly appointment and, scared from SpongeBob biting Hans' nails, nervously bites his nails, backs away, and shuts the door, ending the episode from there. 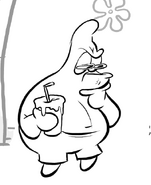