View source
This is the page about the video game. For other uses, see Atlantis SquarePantis (disambiguation).
Video game
Gallery

The game begins with SpongeBob and his friends escaping from Atlantis. Meanwhile, Plankton rampages around Atlantis with a tank he "borrowed" until he comes across the gang. SpongeBob and Patrick begin to remember how they got into this mess. They begin having a flashback that begins with them blowing bubbles until they got trapped in a big bubble that carries them into a cave. The duo makes their way through the cave, avoiding ghost pirates and searching for ladders to venture deeper, where they find the missing half of the Atlantean amulet.

They take it to the Bikini Bottom Museum to see what it is, taking pictures of exhibits and taking down tourists and security blocking the way. Squidward is shocked to see that they found the other half of the amulet. Sandy and Mr. Krabs tag along while walking in the museum. Squidward conjoins the two halves and the path to Atlantis is revealed: the path is a bus.

The bus is powered by song, and the group starts to sing to get to Atlantis in which the bus crash lands along the way, forcing them to drive the bus around Atlantis to find the bus pieces and toolkits to fix the bus.

After repairing the bus and arriving at Atlantis, the group is greeted by the Lord Royal Highness. LRH gives them a tour around the Atlantean palace in which they had to avoid traps that were set around Atlantis for some reason. Mr. Krabs begins to collect some treasure to take with him with some help from Sandy and her bubble catching gun. Squidward poses for the artists in the art studio. Unbeknownst to them, Plankton hid in the Atlantis bus compartment on the way here. He plans to use the Atlantean weapons, the most advanced of all time, to destroy SpongeBob and his friends, and take over the world. After getting out of the bus, he sneaks around Atlantis and makes his way to the weapon room.

While taking pictures of attractions, Patrick accidentally destroys the oldest living bubble and tells the truth to LRH who shows them the real bubble. Squidward reminds them that the bubble that Patrick destroyed was a prop for tourists. Patrick again accidentally pops it for real and the group must run from Atlantean forces, searching for paper clips to open doors. Sandy uses Squidward as a gun to take down the soldiers.

Plankton rampages around the city in his tank just like in the beginning and confronts the gang in which ends the duo's flashback of how they got here. He fires his weapon but is shocked to see it shoots ice cream. LRH captures Plankton, believing he is a talking speck and displays him as a replacement for the recently destroyed bubble and as a replacement to the national treasure of Atlantis. He then orders one of his soldiers to throw away the amulet so that the troublemakers can't return.

The soldier makes his way across Atlantis to the dumpster and tosses it in. Then the gang heads home back to Bikini Bottom on board the bus.

At the beginning of the game, SpongeBob and Patrick are blowing bubbles. They blow one that is too large, and they get trapped inside it, taking them to a cave. In the cave, they discover parts of the Atlantean Amulet. After finding all ten pieces, the cave begins to collapse, and they must escape. After leaving the cave, the two go to have to save Bikini Bottom from an army of Ghost Jellyfish and show the Amulet to Squidward at the museum. He realizes that by finding the Amulet, they can go to Atlantis.

They discover that they are in the lost continent of Mu. The leader of Mu tells them that they can find sheet music for Squidward to play there, but they need to find the red and blue jewels to be able to access it in the ruins of Mu. They find both jewels and fight a boss for the sheet music, but they discover it is too dirty.

They head into the volcano to find a sacred fire flower that can make the music readable. Upon finding it, Squidward's clarinet has been stolen by a giant jellyfish, but they manage to recover it. Squidward plays the sheet music, providing the song fuel needed to reach Atlantis.

After reaching Atlantis, Lord Royal Highness lets them explore it. They travel through the treasure room, a science lab, a music room, and an industrial factory before they finally reach the world's oldest living bubble.

Unfortunately, SpongeBob and Patrick pop it, and the Atlanteans turn on them, forcing the two to have to escape quickly. After fighting through the Atlantean guards, they reach the courtyard of Atlantis, where Plankton pops out. They destroy Plankton's tank and return home to Bikini Bottom.

This commentary is an unlockable feature that goes with each level. It reveals with-in the universe behind-the-scenes content provided by SpongeBob, the director of the game. It reveals that the game is not a video game version of "Atlantis SquarePantis," but based on the events of it.

According to review aggregator Metacritic, the Nintendo DS version received "mixed or average reviews."[2] An IGN review of the Nintendo DS version was headlined "SpongeBob actually managed to be boring." Likewise, the most-criticized aspects of all versions were the clunky camera control, the lackluster AI, and the annoying method of having to return to the start of the level to switch characters. It was also called "too short" and "too easy" for older gamers.[3] An IGN review of the Wii version called the game "second-rate," "sloppy," "tedious," and "really boring." The graphics were criticized for being "bland."[4] The PlayStation 2 version was criticized for the same reasons but was given a slightly lower rating, because IGN wrote the that Wii Remote controls spice up the shooting games.[5]

All versions of the game have backward compatibility on the following systems: 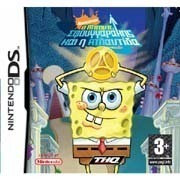 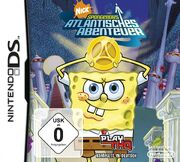 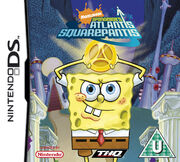 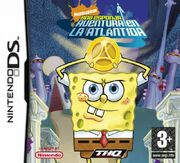 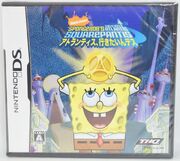 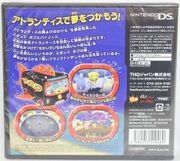 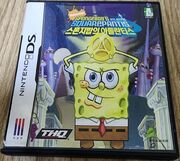 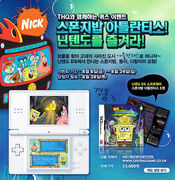 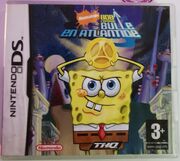 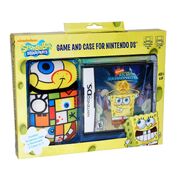 The 2-pack Nintendo DS version with a reversible SpongeBob case. 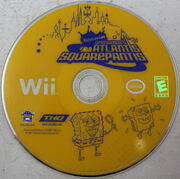 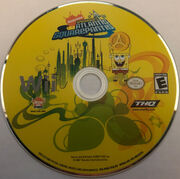 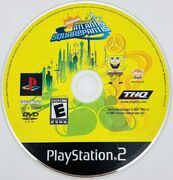 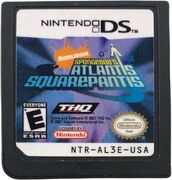