SpongeBob SquarePants vs. The Big One short №:

In the beginning of the short, SpongeBob and Patrick are at the Goo Lagoon when they notice Frank surfing professionally. After seeing this, Patrick wants to surf, so SpongeBob allows Patrick to use SpongeBob as a surfboard.

Patrick gets on the SpongeBoard and slowly starts surfing. However, as Patrick is surfing, SpongeBob absorbs up all the water, causing the beach to have no surfing water left. This leads Gus to ask for the ocean back, as the short ends. 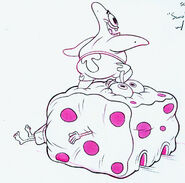