"The Great Patty Caper"
"Sponge-Cano!" is a SpongeBob SquarePants episode from season 7. In this episode, a volcanic eruption brings an ancient warrior to Bikini Bottom with dire predictions.

The episode starts at Squidward's house, Squidward tries to make a self-portrait when he is interrupted by a song that SpongeBob is singing about how he has an "attitude of gratitude". After Squidward tells SpongeBob to stop, he slips on some spilled paintbrushes, falls down the stairs and through the floor, breaks a plumage pipe, resulting in spewing water.

When SpongeBob offers to help, Squidward denies that he needs help and tells SpongeBob not to help him ever again. He tightens the pipe so much that the water can't get through. Squidward then storms off grumpily as he's late for work.

At the Krusty Krab, Squidward rudely yells "Pardon me!" to a purple fish while entering, then walks to the counter and tells SpongeBob to stop staring at him. Squidward scolds everyone that he says he doesn't have time to count pennies when a fish tries to pay for a Krabby Patty with a huge pile of them, comments at a blue fish eating a Krabby Patty tapping his foot on the floor, gets angry with Nat Peterson for holding the door and leaving fingerprints, thinks people are leaving "trash" on the tables, insults a frail woman's clattering dentures, and a red fish's tall hat. He even scolds a blue fish for taking too long to eat and another for taking too long in the bathroom. When SpongeBob passes by still singing about his attitude of gratitude, Squidward scolds him to stop. SpongeBob asks whether he has an "attitude of gratitude," but Squidward says that he is the most miserable person (which means the rudest person) in Bikini Bottom due to the fact that he hates his job and neighbors, and doubts it can get worse. Immediately afterwards, a previously dormant volcano erupts. Everybody in the Krusty Krab evacuates because it is falling to pieces. Mr. Krabs sees no point in trying to run away and demands Squidward's and SpongeBob's life essence after the cash register is destroyed until someone points out the shelter. 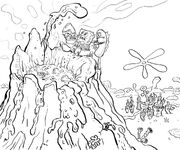 Squidward Is The Most Miserable Person In Bikini Bottom - Full Scene 'Sponge-Cano!' - SpongeBob