"Something Smells" is a SpongeBob SquarePants episode from season two. In this episode, SpongeBob makes a sundae that gives him bad breath.

SpongeBob wakes up one morning and realizes that it is Sunday, and so decides to have an ice cream "sundae" for breakfast. However, he sees he has no ice cream, and finds standard toppings like bananas and cherries to be blasé, so he instead creates a new type of sundae made from onions, ketchup and the contents of a nearly-dead potted peanut plant. Unbeknownst to SpongeBob, the result of eating the sundae is intense halitosis.

After breakfast, SpongeBob begins his Sunday to-do list, which consists of saying "Hi!" to everyone in town. Unfortunately, the townspeople are universally disgusted by the smell of SpongeBob's rancid breath and run away from him. SpongeBob is very confused by this, and asks Patrick if he notices anything wrong with him. Patrick, not having a nose, can't discern the foul odor. After running down a list of possibilities, Patrick comes to the conclusion that SpongeBob is simply ugly. SpongeBob is dismayed by this revelation, and isolates himself in his home. 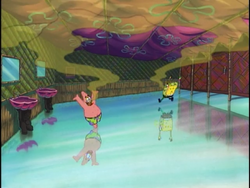 Later, Patrick visits SpongeBob, who has resigned to become a hermit. Patrick tells SpongeBob the story of The Ugly Barnacle, which fails to cheer him up. Patrick then encourages him to take pride in his ugliness. It works, and SpongeBob's confidence grows, so they decide to go see a movie at Reef Cinema.

As they take their seats, all of the movie-goers still try to avoid SpongeBob, which angers Patrick and sends him into a tirade. Patrick forces the other viewers to look at SpongeBob. With every word SpongeBob speaks, the viewers panic and flee, soon leaving no one in the auditorium. Patrick gets hungry, so they go to the lobby to buy a snack. However, no one is at the counter. Instead, SpongeBob pulls some of his sundae out of his pocket and gives it to Patrick. After eating it, Patrick feels a sudden urge to use the bathroom.

While washing his hands, Patrick asks a fish next to him for some soap, but he quickly runs away. Upon finding no one will stay within his vicinity, Patrick fears he has caught "the ugly" from SpongeBob, and hides in a stall with a paper bag over his head. Eventually, SpongeBob smells Patrick's extremely foul breath and comes to the realization that they are not ugly, but simply have bad breath from the sundae. Immensely relieved, the two begin to run around shouting, "We stink!" melting down the theater around them with their noxious breath. SpongeBob and Patrick run into Squidward, looking at wigs in a window display. SpongeBob cries out in joy, "Guess what, Squidward? We stink!" leaving Squidward staring blankly as SpongeBob and Patrick run away laughing.

Retrieved from "https://spongebob.fandom.com/wiki/Something_Smells?oldid=1321702"
Community content is available under CC-BY-SA unless otherwise noted.