Something Narwhal This Way Comes

"C.H.U.M.S"
"Something Narwhal This Way Comes" is a SpongeBob SquarePants episode from season 13. In this episode, two familiar faces from SpongeBob's past visit Bikini Bottom, but they bring a big problem along with them.

The episode starts with a rocket flying through space. It lands on a planet and someone in a spacesuit exits the rocket. It is revealed to be SpongeBob as he plants a flag with a Krabby Patty on it. It turns out that it was just a dream. He then wakes up to hear some noise in his house, so he thinks that he has intruders. He and Gary then go downstairs, and SpongeBob opens the door so Gary can scare away the intruders. It turns out to be SpongeBob's friend from Kamp Koral, Narlene Narwhal, whom he has not seen since he was a kid.

SpongeBob and Narlene hug as they look back at a memory of them at camp. Nobby is riding a sea bear as it is chasing SpongeBob and Narlene, who are holding sausages. Back in the present, Narlene sees how much SpongeBob has grown since they were kids. Narlene came to visit SpongeBob because of a promise that she could always come to him if she were ever in Bikini Bottom. SpongeBob is sad that her brother Nobby is not with her, but soon thereafter, he shows up from the kitchen, holding his fridge. Nobby grabs SpongeBob and gives him a hug. Nobby had gotten a lot bigger since they were kids. Nobby is then hungry, so SpongeBob lets him take what he desired from the fridge. He proceeds to devour the entire fridge as SpongeBob reminisces about the memories at camp. Nobby's sea mule shows up and starts to eat a part of SpongeBob's head.

The next morning, the sea mule brays on top of SpongeBob's house. SpongeBob wakes up, pets Gary, then goes into the bathroom to get ready for the day. He covers his eyes and shrieks as he sees Narlene in his toilet. Narlene thinks it is a whirlpool bathtub and joyfully spins around in it. SpongeBob tries to hand her a scrub brush, however, she grabs SpongeBob instead. Patrick is outside the bathroom wrapped in a towel waiting to get in. Afterwards, Nobby cooks pancakes for breakfast and flings copious amounts to SpongeBob, Narlene, and Gary.

Narlene, Nobby, and SpongeBob sit on chairs outside of SpongeBob's house. Narlene uses a knife to shave a wood log into a toothpick. She then passes the knife to Nobby, who shaves a wood log into a turkey. SpongeBob is handed the knife and ends up shaving himself into a banjo. He joyfully jumps out of his chair and moves toward Squidward, who runs away screaming.

SpongeBob's house is rebuilt out of wood and medal scraps, which Narlene considers to be "hillified." SpongeBob is thrilled as Hans changes his outfit and Narlene's cousin Willybob shows up at the front door. SpongeBob and Willybob are introduced to each other. Willybob starts wrestling with Nobby until Narlene shows up and joins the fray. A large band of nearwhals storm the house and make sweeping changes. They also set up camp outdoors and extend onto Squidward's property. Squidward has trouble sleeping until he ultimately decides to move out. When he walks outside, Patrick grabs him and starts to square dance.

A news report brings breaking news of nearwhals ravaging Bikini Bottom. Citizens are warned to lay low to avoid any further complications. The reporter is turned into a hillbilly as the broadcast is cut off. SpongeBob tries to get what he thinks is Narlene's kin to leave. Narlene and Nobby come to the realization that they are not even real narwhals, they are actually nearwhals. With SpongeBob's suggestion, they go to Plankton for help. He agrees to contact his family as they had been feuding with the nearwhals for many years. His family swiftly reacts at hearing the word "nearwhals." They come out of the phone and storm out of the Chum Bucket ready to drive the nearwhals out of Bikini Bottom. They fight the nearwhals in various locations throughout the town and are successful in their mission.

Nobby packs many of SpongeBob's belongings into the wagon. SpongeBob, Narlene, and SpongeBob say their final goodbyes as Narlene promises to visit again soon. Nobby pulls the wagon to Squidward's house, where him and Nobby enter. Narlene thinks Squidward welcomed her to his house anytime, which he instantly denies. The sea mule shakes Squidward's house as the episode ends.

This episode was confirmed by Cartoonlounge.de on August 24 and Dave Cunningham on August 25, 2021. 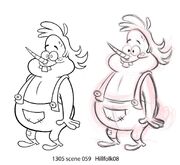 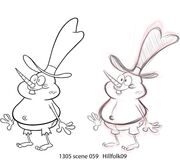 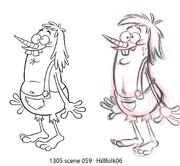 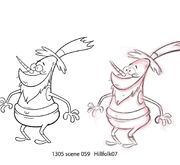