Someone's in the Kitchen with Sandy

"Stuck in the Wringer"

"The Inside Job"
"Someone's in the Kitchen with Sandy" is a SpongeBob SquarePants episode from season 7. In this episode, Plankton poses as Sandy in order to steal the Krabby Patty formula.

The episode starts off at the Krusty Krab's kitchen, Plankton hides in one of the sesame seeds of a bun, attempting once again to steal the Krabby Patty secret formula. SpongeBob takes the bun Plankton is hiding in and makes a Krabby Patty with it, which he delivers to Sandy's table. Sandy partly unzips her suit and slips the patty into it. Then, Plankton jumps out of the sesame seed just before Sandy takes a bite. He faints shortly after since there is no water in Sandy's air helmet.

Later, Sandy returns to her treedome. She goes into her bathroom, where she takes off her diving suit and glass helmet. Then, she gets in the shower, turns it on, and rips off her fur coat and bikini. Sandy is almost completely bald and pink, and is wearing a bra and panties in the shower. She picks up her fur coat, sniffs it, and hangs it on a hook. She resumes her shower after she does this.

Drops of water from the shower fall into her helmet, thereby reviving Plankton. Then, Plankton notices Sandy's pelt hanging on the hook. He takes it, locks Sandy in her bathroom, and brings Sandy's fur coat to the Chum Bucket. He motorizes the fur coat and moves it to the Krusty Krab, pretending to be Sandy. SpongeBob is happy to see "Sandy" again, but notices that "she's" not wearing her diving suit and oxygen helmet. "Sandy" replies that he can breathe underwater now. SpongeBob believes "her," of course. Plankton asks SpongeBob for Krabby Patty tips or information.

After some short tips from SpongeBob, Mr. Krabs walks in through the door at the corner of the kitchen and declares that he is leaving the formula out in plain sight by setting it down on a table. Plankton cheers happily in Sandy's fur coat, since stealing the formula is now much easier.

Meanwhile, Sandy finishes her shower. She wraps a towel around her body and walks over to dry her "stinky fur coat." However, her fur is gone. Finding herself locked in, she breaks down the door of the bathroom, fully aware that someone must have stolen it. She then flings the towel off herself, puts a coffee pot on her head in place of her helmet, and runs off to find the culprit, who's possibly wanting to sell her pelt on the Bikini Bottom black market. However, the Bikini Bottom residences think she is naked, and make fun of her hairless pink skin, calling her a "hairless goat," a "nudist ferret," and a "naked chipmunk." Sandy makes a makeshift skirt out of seaweed to cover her "hind end," but it overheats, gets brittle, and shatters into pieces when she warms her hairless body by a vent.

At the Krusty Krab, SpongeBob is giving Plankton an irritating lesson where he has to put the bun on the exact spot of the patty, but he is always off by a random amount. He gives up, steals the formula, and tries to escape. The real Sandy enters the Krusty Krab and stops him in the nick of time. She then rolls up her fur coat and puts Plankton in a jar of mustard. Unfortunately, the police catch up with her. When they announce that they will take the "sicko" away, Sandy thinks that they are trying to arrest Plankton for stealing her fur coat, but instead they arrest her for public nudity, making her sigh gloomily as the episode comes to an end. 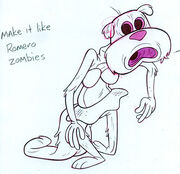