James Arnold Taylor as Nick Fishkins and the Isopod

"Lame and Fortune"
"Sold!" is a SpongeBob SquarePants episode from season 9. In this episode, SpongeBob and Patrick believe their homes have been sold, so they move away, which thrills Squidward.

After watching a commercial about a guy named Nick Fishkins who sells houses, Patrick thinks his house got sold. SpongeBob invites him to stay at his place, but end up watching the same commercial at night, leaving them seemingly homeless. They go to the Krusty Krab, where they make a house out of the trash from the restaurant's trash.

In the morning, Squidward wakes up and goes to the Krusty Krab in a happy mood. However, he becomes gloomy again after seeing SpongeBob and Patrick in their trash house as he is taking out the trash. He finds out what happened to them and sees this as his chance to live alone.

At night, Squidward is excited to go home, when SpongeBob and Patrick want to visit their old homes. He tells the two that a German family and a rock band, respectively, have moved into their homes. However, they still go to their old homes anyway, so Squidward dresses as a German man to trick SpongeBob into thinking his house is now owned by German fish.

Later, he sees Patrick going to his house, so he dresses as a rock band member and says he can play the electric clarinet. However, SpongeBob calls and he goes over to his house, still in the rock band costume. He gives him a meal and then sends him outside, only for him to want his children to sing for him. He goes back to Patrick's house to prove that he can play the electric clarinet.

He then goes back to SpongeBob's house to sing for him using puppets as the Fishtrap children, with Patrick coming along to watch as well. When Patrick suggests they bring the band from his house to come over, Squidward snaps and tells the two their houses were not really sold as Nick Fishkins' job is to flip houses. When he calls him to flip his own house, SpongeBob and Patrick literally flip it for him. When Nick arrives, he does not want to buy the house as it is broken, much to Squidward's dismay. Squidward's house crumbles as he groans "Ach du lieber," with the episode closing from there.

Vincent Waller confirmed this episode on Twitter on April 18, 2016.[1] 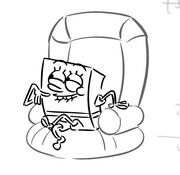 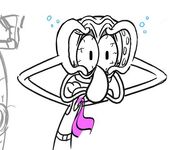