Encyclopedia SpongeBobia
Register
Don't have an account?
Sign In
Advertisement
in: Articles in need of better images, Articles with incomplete infoboxes, DVDs,
and 3 more

View source
If you were looking for the article about the episode, then see "Slimy Dancing."

5
Slimy Dancing[1] is a SpongeBob SquarePants DVD that was released in Korean and contains 4 episodes from season 4 and 1 episode from season 5. This DVD is based on the episode with the same name. 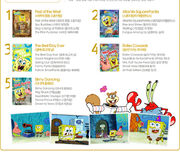