"A Life in a Day"
"Slide Whistle Stooges" is a SpongeBob SquarePants episode from Season 6. In this episode, SpongeBob, Patrick, and Squidward play with slide whistles.

In the beginning of the episode, SpongeBob and Patrick get new slide whistles and are constantly playing them, even outside of Squidward's house, much to the annoyance of Squidward. He becomes increasingly annoyed as they use the slide whistles as sound effects for everything he does, including reading a book, making his bed, and cleaning his toilet. He eventually has enough of it and flees his house. This results in SpongeBob and Patrick following him, thinking that he is finally playing with them and ignoring his cries to leave him alone.

He has finally had enough of it and snaps. He forcefully grabs SpongeBob's slide whistle and uses it against the two. SpongeBob says that he has an equally better ear for music and soon buys one himself.

Squidward then becomes obsessive over it and proceeds to play it around town: first, he scares Dennis out of his wits as Dennis thinks he is being annoyed by ghosts. Soon after, Squidward impersonates a baby and scares Sadie out of her wits, making her see Squidward as a "baby assaulter," resulting in the annoyance of many people.

Soon, the Bikini Bottomites form an angry mob and end on the warpath against Squidward. Squidward manages to take control over a gasoline tanker truck, destroys the Chum Bucket and the Krusty Krab all at once, jumps over a row of boatmobiles through a ring of a fire, and drives away from the mob thinking he has escaped. Squidward says that he does not want to stop, but SpongeBob and Patrick appear and ask if he is sure he does not want to.

Squidward quickly notices that SpongeBob was trying to warn him that a cliff was ahead but there is nothing Squidward can do now that he is closer to it. SpongeBob and Patrick stop just in time, but the gasoline tanker truck keeps going and falls off the cliff, causing it to explode, much to the joy of the town as they see that Squidward is finally stopped. At the hospital, the slide whistle is stuck in his throat, and since no one at the hospital has the technology to remove it and it is the only way he can communicate, they leave it on Squidward. SpongeBob and Patrick then play around the hospital with the whistles, as the episode ends. 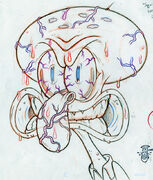 The final product in one of Robertryan Cory's drawings.

"SpongeBob and Patrick drive Squidward nuts with their new slide whistles. I'm a sucker for any episode where a tiny thing gets on Squid's nerves until he snaps. (Roger[sic] Bumpass is great at vocalizing Squidward’s "losing it.")"