Slick is a robot who appears as an enemy in Battle for Bikini Bottom.

Slicks are massive robots that tower above most other non-boss robots. Their torsos, shoulders, and hands are chrome along with their head, and they have lime-green eyes. Instead of having legs they have three inner tubes that they use for mobility, apparently by gliding across the ground. They hold what appear to be an oil can in their left hand and a bubble wand in their right hand.

Slick is a rare enemy first seen in the Flying Dutchman's Graveyard, only appearing elsewhere in SpongeBob's Dream. It can shoot oil blobs at the player from a long distance. The oil blobs do not hurt the player, but they leave behind puddles on the ground that are hard to walk in because they are slippery.

Slicks can be defeated in one hit, but first, the player needs to destroy the Slick's oil bubble shield, which also takes one hit to destroy. If they wait long enough after they have popped Slick's bubble shield, Slick will regenerate the bubble shield. However, Sandy can lasso a Slick and destroy it even if it has its shield up. Destroying a Slick earns the player 100 Shiny Objects, the highest amount of any object or enemy in the game.

In the remake, Slicks have been buffed considerably; their oil blobs actually do damage on contact now, and they now take three hits to destroy instead of one.  However, Slicks can be instantly destroyed by hitting them with a Bubble Bowl or Cruise Bubble as SpongeBob.

Concept art with Slick from Battle for Bikini Bottom - Rehydrated 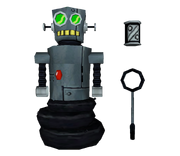 Back Of Slicks Model
Add a photo to this gallery
Retrieved from "https://spongebob.fandom.com/wiki/Slick?oldid=3432791"
Community content is available under CC-BY-SA unless otherwise noted.