"Suds"
"Sleepy Time" is a SpongeBob SquarePants episode from season 1. In this episode, SpongeBob visits the dreams of others, unknowingly ruining them in the process.

After settling for bed in the evening and sleeping, SpongeBob has a strange dream where he is driving a hot rod in a Krabby Patty-themed location and he has his driver's license, then crashes into a rock. However, Mrs. Puff appears and tears up SpongeBob's license, and he is then propelled out of his own dream. He appears as a small, glowing version of himself in the outside world, where he sees himself sleeping. SpongeBob realizes that he has no dream to go to, until he sees Gary's dream cloud. He then jumps in, frightening Gary.

In his dream, Gary has a humanoid body who can speak English and resides in a huge library. Gary tells SpongeBob some limericks before SpongeBob goes out of Gary's dream cloud and into Patrick's. Patrick's dream is completely empty, except for a kiddy ride that he is riding on and a door resembling that of SpongeBob's front door that leads out of the dream. SpongeBob explains to him that in a dream, he can do whatever he wants, which he demonstrates by changing size and creating a million copies of himself. Patrick says he's already satisfied, and SpongeBob goes out of Patrick's dream cloud. The ride then stops and Patrick takes out a quarter but drops it in a sewer grid.

Next, he goes into Squidward's dream, where Squidward is playing his clarinet for a king in a theater. SpongeBob distracts the king by telling him a limerick that Gary recited in his dream, and Squidward stops, mad at SpongeBob for invading his dream. The king growls at him for not playing. After this happens several times, Squidward becomes so angry that he snaps his clarinet, but SpongeBob saves him by turning into a clarinet. It produces no sound, and SpongeBob just sings horribly, which surprisingly everybody applauds at. A crowd then picks up SpongeBob while throwing Squidward into a fruit cart, wondering how he can make such music. He then transforms back into his normal form and runs out the exit doors at the back of the theater. Squidward is knocked into the fruit cart by the audience and the king while they chase SpongeBob as he exits the dream.

SpongeBob goes into Sandy's dream, where they are skydiving and have to land on a painted target. SpongeBob asks if it's "kind of dangerous," and Sandy says "Not as long as you got a big ol' parachute." SpongeBob misunderstands her twice (such perceiving "pair of shoes" and "parakeet"), and while trying to explain to him, Sandy fails to open her own parachute in time and lands in a truck filled with clam manure. SpongeBob falls out of Sandy's dream and says to himself "All right, that's it. No more messing with people's dreams."

However, he then goes to what he thinks is Mr. Krabs' dream, but actually is Pearl's dream, where she is having a tea party with her stuffed animals in a very childish and girlish setting. After realizing this, he immediately goes to Mr. Krabs' dream, where he's fishing for money. Mr. Krabs instructs SpongeBob to pull out his money net from his back pocket, which turns out to be Mr. Krabs' wallet. SpongeBob and Mr. Krabs manage to catch Moby dollar, but it escapes and Mr. Krabs shoots SpongeBob out of the dream via a harpoon gun tied to SpongeBob.

He is launched directly into Plankton's dream. Plankton, in his dream, is a giant monster and can shoot lasers from his eye, and is destroying the city. SpongeBob realizes that it isn't a dream, but a nightmare. Once Gary is about to be crushed by Plankton, SpongeBob pricks his foot by turning into a pushpin, and Plankton deflates. The angry Bikini Bottomites close in on him and Plankton tells them that he guesses he has some explaining to do, but gets his punishment by being stepped on by everyone else. Plankton then wakes up in terror.

SpongeBob then goes back to his own dream cloud, where the angry faces of everyone whose dreams he entered appear around him. When he wakes up, everyone (except Patrick) is in his house complaining that he's messed up their dreams and tells him to stay out. Just before the episode ends, Patrick then appears out of nowhere and asks everyone if they have a quarter, and they stare at Patrick in confusion. 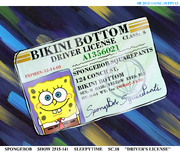 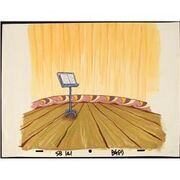 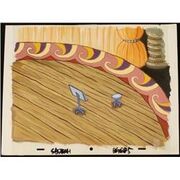 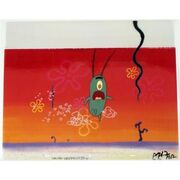 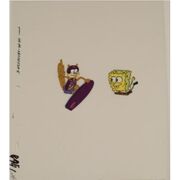 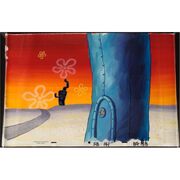 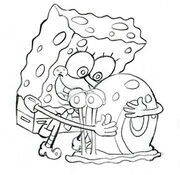 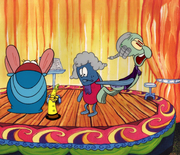 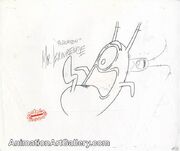 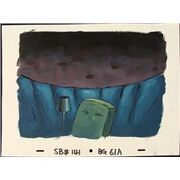