Mostly harmless... unless woken. Somewhat moody. Likes to express himself by blasting everything in sight or fingerpainting.
—Police Station

Sleepy-Time is a large, sleepy robot that casts a light around its personal space. This light turns red as the player approaches it. In their awake form, Sleepy-Times are revealed to have green eyes.

Sleepy-Times are first encountered at the beginning of the Rock Bottom level and are among the most difficult robots to deal with in the game due to their battle mechanics.

There are many ways to deal with a Sleepy-Time but the most common way is to sneak by them using SpongeBob. However, there are times when the player will run into two or three Sleepy-Times next to each other, where sneaking past undetected is impossible. A safe way to defeat a Sleepy-Time is to hit it from behind from a distance with SpongeBob's Bubble Bowl technique, but it must be out of the Sleepy-Time's light field or it will push the Bubble Bowl away.

Another way is to sneak up on it from behind and attack it from there. The player must be careful when doing the latter method if there are more than one, as the other Sleepy-Time(s) will wake up and fire a laser beam. An alternative safe way to defeat them easily is with the Cruise Bubble.

They are found in Rock Bottom, the Krusty Krab in Bikini Bottom, the Kelp Forest, and SpongeBob's Dream. Destroying a Sleepy-Time will award the player 70 Shiny Objects.

Sleepy-Times appear in the mini-games 'Manhole Memory" and "Robot Alley."

An earlier version of Sleepy-Time.

Concept art with Sleepy-Time from Battle for Bikini Bottom - Rehydrated 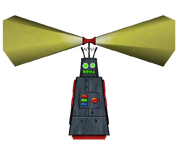