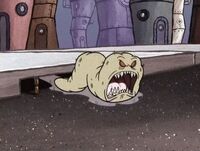 Supervillain
Member of the "Bad Guys All Together For Book Club"

Dee Bradley Baker (in "The Bad Guy Club for Villains")

In "Mermaid Man and Barnacle Boy II" and the video games, he is a gray sea slug with red eyes on stalks, a pair of thick, black eyebrows, and a mouth filled with sharp teeth. He wears a green mask and a green suit with a purple collar and a golden triangle on it.

From "The Bad Guy Club for Villains" onwards, he is more realistically designed, and now has a beige body with brown spots and hair sprouting in several places. His teeth are more sharp and jagged, and his eyes are fully red.

The Sinister Slug can use the slime he produces to climb up walls, and can spit slime onto his enemies to trap them.

He appears as a cardboard cutout during The Adventures of Mermaid Man and Barnacle Boy.

"The Bad Guy Club for Villains"

In the lost episode of "The Adventures of Mermaid Man and Barnacle Boy," he was one of the villains to join the B.G.A.T.F.B.C. During the fight between the heroes and the villains, he tries to attack Mermaid Man with his slime, but Mermaid Man dodges the slime and causes the Atomic Flounder to get hit instead. At the lost episode's end, he and the other villains reveal that they were actually together for a book club.

He appears on a poster for the "Mermaid Man and Barnacle Boy" episode The Case of the Curious Cliff Hanger.

After the Yellow Avenger defeats Man Ray, Squidward reveals that the Sinister Slug has traveled to Jellyfish Fields to cause trouble and prevent the talent show from happening. The Sinister Slug managed to scare Squidward away and made him drop his clarinet while doing so, and Squilliam Fancyson was scared so much that he left for home.

A cardboard cut-out of him appears in the DS version during the "Mermalair" minigame, where it can be hit with Waterballs.

He appears as a cardboard cutout that the player fights in one of the nano-games.

He appears as a cardboard cutout that the player can buy and place in Bikini Bottom.

He appears in the book's bonus poster, along with many other Mermaid Man villains, and a wax figure of him is featured in the comic The Secrets of the Merma-Lair!

He appears on the comic book's cover staring angrily at SpongeBob, along with many other villains.

Retrieved from "https://spongebob.fandom.com/wiki/Sinister_Slug?oldid=2042390"
Community content is available under CC-BY-SA unless otherwise noted.