"Truth or Square"
"Single Cell Anniversary" is a SpongeBob SquarePants episode from Season 6. In this episode, SpongeBob helps Plankton find an anniversary gift for Karen.

Plankton walks to the Chum Bucket stinking with the stench of "failure," as he calls it, and Karen is in a very happy mood. Karen then smells Plankton and gives him a bath, taking off his skin, which is revealed to be his clothes. After he has washed, Plankton learns that it was his and Karen's wedding anniversary and that Karen got him a copy of the Krabby Patty secret formula for his present, but he cannot have it until he gets her a present.

Plankton is crying on the road and SpongeBob hears him crying. He sniffs like a dog and soon runs into Plankton. He tells SpongeBob the news, and SpongeBob yells to all of Bikini Bottom that there is a "Love Emergency." SpongeBob then tells Plankton that his present has to come from the heart, and he suggests a serenade. Plankton then remarks that he cannot sing, and SpongeBob takes him to the pineapple and works on Plankton's vocal cords. Plankton sings so high that he breaks the glass Squidward was drinking out of his juice and Sandy's helmet breaks while she was walking, then she runs back to her treedome for air. Then, Plankton goes off to serenade Karen.

Plankton walks into the Chum Bucket and starts singing a mariachi-style song, and SpongeBob and Patrick play guitars in the background, wearing Mexican-style clothing and mustaches. Plankton also shakes maracas. Karen cries when it is over, and then she starts uploading the Krabby Patty secret formula. SpongeBob is mad at this, so he unplugs what he thinks is Karen, but was just the coffee maker. Karen finally uploads the formula, but she starts crying again, and she breaks down and shorts out, leaving Plankton still without the secret formula, making him confused. She then shuts down, and the E.M.I.L.P (Emergency Mother-In-Law Program) uploads and starts nagging, saying that Karen could have married the ATM, someone with money. 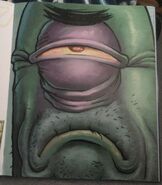 Unused Close Up Of Plankton’s Face

"Kind of obscure, but one of the few episodes to focus on the "Honeymooners-like" marriage of Plankton and Karen (just a microorganism and his computer wife tryin' to get by). I love how Plankton swings between henpecked husband and world-conquering megalomaniac."