View source
This is the page about the digital collection. For other uses, see Patrick (disambiguation).

"Everything's coming up Patrick in this swell collection that includes the discovery of stink (thanks to a new nose) ... the joy of pulling (naked!) pranks ... the most secrety secret in all of secretdom ... and a whole lot more!" 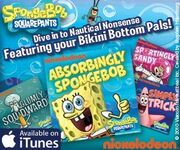