"Hide and Then What Happens?"

"Hide and Then What Happens?"

"The Masterpiece"
"Shellback Shenanigans" is a SpongeBob SquarePants episode from season 7. In this episode, Plankton impersonates Gary to get the secret formula, but it goes too far when SpongeBob is led to believe his pet is terminally ill.

This episode starts out at the Krusty Krab, where SpongeBob is getting ready for closing time. He asks Mr. Krabs if he can bring home a Krabby Patty for Gary because the next day is Bring Your Pet to Work Day. Mr. Krabs lets him. However, when SpongeBob checks the freezer (along with all others), there are no more Krabby Patties left at all. He starts complaining to Mr. Krabs about this, so the latter just decides they should make a fresh batch of them. Plankton is spying on SpongeBob and Mr. Krabs at this moment and he has an evil plan.

Later that night, SpongeBob arrives home with some kelp fries for Gary. He then tells him that he needs a bath, which makes Gary run away. SpongeBob looks for Gary all over the house and then when Gary falls into a plant, he decides to give him his bath in the morning.

The next morning, there is a knock on the door and Gary answers it. It is Plankton in a salesman disguise. He claims that he is giving Gary a vacation to a snail resort for one night and tells Gary to wear a fake shell while he is there, while also lying about cleaning his real shell. Gary puts on the fake shell and leaves. Afterwards, Plankton gets into Gary's real shell.

SpongeBob then gives Plankton (in the Gary disguise) his bath. While he is doing that, he discovers that "Gary" is green and talking, and he thinks that he is sick, so he takes "Gary" to the hospital, where the doctor gives him bad news. They try every test imaginable, but nothing is found wrong with him (the doctors never saw anything like this). "Gary" asks SpongeBob for one Krabby Patty before he dies, so SpongeBob starts taking him to the Krusty Krab. However, on the way there, the real Gary rides by on the bus and sees SpongeBob carrying Plankton disguised as himself. Gary gets mad, stops the bus, and gets out.

At that moment, SpongeBob puts Plankton in the kitchen and goes to make him a Krabby Patty. However, while he is waiting, the real Gary comes in and beats up Plankton. Mr. Krabs sees him doing this and sees Plankton cowardly run out of the kitchen, so he gives Gary a job as a bouncer, with Gary letting people into the Krusty Krab one at a time. Then Plankton comes, disguised again, this time as a small fish boy. However, Gary is not fooled by the disguise and growls, causing Plankton to panic and run away in fear. SpongeBob then says to Mr. Krabs how Gary is doing a great job as a bouncer and also says he's "really earning his pay," leaving Mr. Krabs shocked. 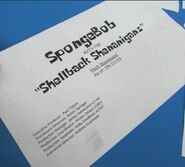