"Fear of a Krabby Patty"

"Fear of a Krabby Patty"

"Shell of a Man" is a SpongeBob SquarePants episode from season four. In this episode, Mr. Krabs molts and loses his shell just before meeting up with his Navy Buddies so SpongeBob takes his place.

At the Krusty Krab, SpongeBob is in the middle of making a Krabby Patty, and when he is finished, he cries as he gives it to Squidward so that he can give it to customer number 5. The customer is revealed to be SpongeBob, who grabs the order, and eats it. Meanwhile, outside the Krusty Krab, Mr. Krabs calls SpongeBob into his "Hidey Hole" under the dumpster, where he keeps his belongings from when he was in the Navy in a treasure chest.

They take it into Mr. Krabs' office and Mr. Krabs tells SpongeBob about his old Navy buddies and his nickname "Armor Abs Krabs," and that his Navy Reunion is tonight. Mr. Krabs then tells SpongeBob to leave him to revel in his memories and get his work station in "shipshape," which he does with great enthusiasm. SpongeBob soon hears Mr. Krabs scream and goes into his office, where he finds that Mr. Krabs has molted his shell, leaving him a flabby mess. He kicks his shell in frustration, causing it to fly into SpongeBob, who becomes stuck inside it. Mr. Krabs then tells SpongeBob to assume his identity at the reunion so that his Navy friends will not see him in this state.

Later, at the reunion, SpongeBob initially puts on a convincing performance, but goes onstage to accept his "Trophy of Manly Toughness," he tells a story of him jellyfishing in Jellyfish Fields, and nearly reveals his true identity before Mr. Krabs tells him to get offstage. 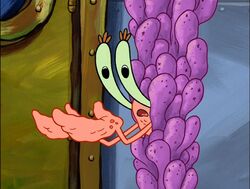 He attempts to leave, but Torpedo-belly insists that he body-slam him to test if he still has "armor abs." When he punches SpongeBob, he flies around the room, cracking the shell and revealing SpongeBob. They get angry, but the real Mr. Krabs emerges from the bush that he had been watching from and reveals himself. He begins to walk away in shame, until Muttonchop gives him back his trophy, saying that revealing his condition was the manliest thing anyone could ever do, and revealing that they have all had unmanly secrets as well: Muttonchop's sideburns are fake, Torpedo Belly had his torpedo removed long ago after his retirement from the Navy, Lockjaw Jones lost his Navy choppers and now has to wear dentures, and Iron Eye's eye is actually made of Formica.

As Mr. Krabs walks away with SpongeBob, he says "Yeah, poor suckers. At least my shell will grow back!" and they both start laughing as the episode ends.

Retrieved from "https://spongebob.fandom.com/wiki/Shell_of_a_Man?oldid=2481574"
Community content is available under CC-BY-SA unless otherwise noted.