"Sand Castles in the Sand"

"Sand Castles in the Sand"

"Chum Bucket Supreme"
"Shell Shocked" is a SpongeBob SquarePants episode from Season 6. In this episode, SpongeBob searches for alternatives when Gary needs a new shell.

In the middle of the night, SpongeBob is having a nightmare while chattering his teeth. After SpongeBob wakes up from the nightmare, he hears a noise down in his kitchen. SpongeBob is frightened about the noise. He tries to call for help, and realizes that his telephone line is cut, and later puts on his army helmet and grabs his tennis racket. His knees are shaking as he runs to open up the door, and slides down to the library. SpongeBob later trips on his toy truck, and falls down the steps. He runs into his kitchen and finds his novelty teeth chattering. He finds his fancy boot hopping around and smacks the boot with his tennis racket which leads him to smack his face. SpongeBob drops his tennis racket and karate-chops the boot, unaware that Gary is hiding in his fancy boot. Gary comes crashing out of the boot, and spins around, while a bucket and soap come down on Gary. When SpongeBob takes the bucket off of Gary, he finds that Gary has soap in his mouth, and manages to take it out now hearing Gary's gasps. SpongeBob thinks for a minute that Gary is not hurt, and then touches Gary's shell, as it breaks.

SpongeBob apologizes to Gary. Gary meows, smells his own stink, feels pain, and begins to cry. SpongeBob grabs Gary and tries to hug him, but Gary refuses and goes up to the ceiling in more pain. Later, SpongeBob tries to find out how to fix Gary's shell, first by taping it back together, although it breaks once again.

In the bedroom, where SpongeBob goes through his trunk to find solutions for Gary, he first finds his Hawaiian shirt, but realizes it does not work. He then finds his Christmas Santa hat, but realizes that it is too last season, and later finds his gorilla mask that he needs for Halloween. SpongeBob first finds his copy of his pants, and tries them on Gary, but they get wet and drop. Next, SpongeBob finds his space helmet by trying it on his head, and then Gary but realizes it does not look right. SpongeBob later finds his race car helmet, and puts it on Gary now realizing that Gary rocks. Gary throws it off and shows him a Shell Spiffy magazine, which is a magazine full of snail shells. Gary meows at SpongeBob to take a look at page 72, which features his old shell with many new features, and the cost is $9,595.95. SpongeBob wonders where he can get a high quality shell without spending a fortune. Gary knows where to get a shell very cheap, and shows SpongeBob a commercial which now features Scooter cleaning up his snail's broken shell, which is for Angry Jack's Shell Emporium, where the prices are always very cheap. Angry Jack introduces himself through the television, and advertises a commercial full of shells which include a refurbished plastic shell, and gets angry with the numbers in his face, along with the other shells.

Angry Jack starts talking about selling for real. When SpongeBob and Gary get to the Shell Emporium, they interrupt Angry Jack in the commercial. SpongeBob apologizes to Angry Jack, thinking that he is going to get angry. Angry Jack reveals that he just does it for the commercial to make them loud and better. Jack then finds a shell that looks exactly like Gary's old one, and tries it on Gary, which makes him very happy. SpongeBob thinks it is perfect, and wants to buy it for Gary because it looks like his old one. The shell then slides off of Gary and breaks, which makes him depressed once again. Jack then decides to try a different shell on Gary. SpongeBob wants to take it, and decides to make sure that it is put down by pushing down on it harder. He manages to break it, which makes Gary mad at him again. He manages to grab another shell, but accidentally breaks it over Jack's face. SpongeBob manages to grab another shell off of the shelf, but trips over his shoe laces, causing it to break. Jack hands over Gary to SpongeBob in order to take care of the shells, and tries on the reflective model on Gary. The reflection blinds both SpongeBob and Gary. After being almost blind, SpongeBob accidentally starts to break all of the shells in the store. Jack gives SpongeBob one more shell which is proven indestructible. SpongeBob makes sure that his hand and shoes are perfect, and wraps them up in bubble wrap and tape, but the shell manages to slip through the bubble wrap, and breaks.

SpongeBob mentions about reducing inventory, which makes Jack angry for real, and demands immediate payment. SpongeBob hands Jack some quarters, and Jack demands one arm and legs, also a heart and one eyeball, and his pants.

Later, SpongeBob is walking while carrying Gary, wishing that his shell would grow back, and then finds a square cardboard box in front of a dumpster, he draws on it, and it becomes Gary's replacement shell. Unfortunately, Gary is more depressed and he and SpongeBob both break down in tears. Mr. Krabs comes out from the dumpster and SpongeBob immediately has an idea. SpongeBob wants Mr. Krabs to help him find a new shell for Gary. Mr. Krabs manages to shake SpongeBob upside down to find some money to help Gary get a new shell. Mr. Krabs starts to walk away as SpongeBob manages to make a deal to work for free for the rest of the year. Mr. Krabs decides that he wants to cut SpongeBob's health insurance and SpongeBob makes the deal.

That night at SpongeBob's house, he has another nightmare while his teeth are chattering once again. He turns on his flashlight and sees Mr. Krabs' shell on Gary. However, he sees Mr. Krabs coming in through the window very cold, and wants to borrow a blanket. After giving Mr. Krabs a blanket, SpongeBob manages to smart off his mouth to Gary about the shell. Then Gary, once again annoyed, locks SpongeBob outside and turns off the light in the house. 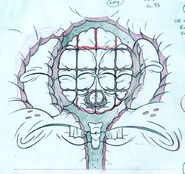 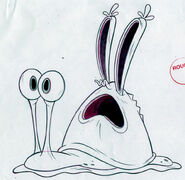