They make it to the Goo Lagoon to meet the turtle ladies, but they are more interested in Patrick which makes Tony jealous. Tony pops out of his shell, which leads Patrick to go inside his shell. When Patrick makes it into his shell he uses his record collection as a frying pan, while using a frying pan as a record, and tearing his wall-art. The two cause havoc inside Tony’s shell which causes chaos to erupt at the Goo Lagoon, tipping over buildings, being tied to a swing set, and destroying the Krusty Krab from which Patrick made a to go order. Eventually, a giant rock destroys their home, causing them to start crying, and the turtle ladies decide to leave. Patrick gets an idea for a home that they can share. They decide to use Squidward's House as a rock and a shell. The episode ends with Squidward arriving home from his shopping, seeing his house being taken, and he begins to chase after them. 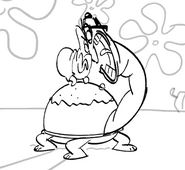 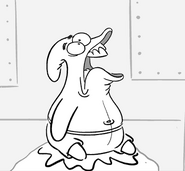