"Senior Discount"
"Shell Games" is a SpongeBob SquarePants episode from season 12. In this episode, Patrick discovers that the rock he lives under is actually the shell of a sea turtle who overslept.

A sea turtle named Tony is getting ready to see the lady turtles at the Goo Lagoon. He begins his daily routine by playing music from his record player, trying to lift his weights, eating his breakfast in a can, and brushing his teeth until his mirror cracks to think that the lady turtles will see him like this. He decides to make himself look clean and gets himself out of his shell and leaves. Meanwhile, Squidward begins to celebrate because he thinks that Patrick is leaving.

While Tony is getting himself ready, Patrick wakes up and climbs on top of Tony's shell to break his morning almond with a wooden hammer. When Tony hears the whack, he starts wobbling to try to get Patrick off of his shell, and Patrick thinks that his rock is moving. Patrick grabs Tony and uses a jackhammer and a bomb to break his morning almond. Tony explains to Patrick that his rock is his shell, but Patrick does not want to leave, so he glues himself on top of Tony's shell. They go to the barber shop to remove Patrick from his shell, and a spa so that Patrick will get dehydrated from the steam, but both of these do not make Patrick leave.

They make it to the Goo Lagoon to meet the lady turtles, but they are more interested in Patrick, which makes Tony jealous. Tony pops out of his shell, which leads Patrick to go inside his shell. When Patrick makes it into his shell, he uses his record collection as a frying pan, while using a frying pan as a record, and tearing his wall-art. The two cause havoc inside Tony's shell, which causes chaos to erupt at the Goo Lagoon, tipping over buildings, being tied to a swing set, and destroying the Krusty Krab, from which Patrick made a to go order. Eventually, a giant rock destroys their home, causing them to start crying, and the lady turtles decide to leave. Patrick gets an idea for a home that they can share. They decide to use Squidward's house as a rock and a shell. Tony walks away with Squidward's house as his shell and meets the lady turtles and they tell him he is looking sharp. The episode ends with Squidward arriving home from his shopping, seeing his house being taken by the turtles, and he begins to chase after them. 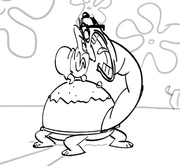 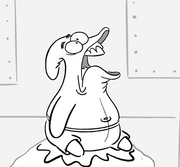