"Gary Takes a Bath"
"Shanghaied" is a SpongeBob SquarePants episode from season 2. In this episode, Squidward, Patrick, and SpongeBob board the Flying Dutchman's Ship.

At his home in Encino, California, Patchy the Pirate tells the audience that they will be watching his favorite episode, "Shanghaied," but Potty shoots him out of a cannon.

One morning, SpongeBob starts his morning off by opening a box of Kelpo for breakfast, featuring "one of eight essential prizes inside." He pours out the whole box and searches, but cannot find any prize. Suddenly, a giant anchor crashes into SpongeBob's house, which SpongeBob naïvely believes to be a "baby" that came from the sky. He then alerts Squidward, who explains that it is merely a giant anchor while Patrick comes up and has the same stupid conclusion of the anchor being a baby. Squidward ceases their idiotic talk and tells them to get lost on the anchor. Suddenly, the anchor shifts, crashing into Squidward's house as well. An annoyed Squidward begins climbing the anchor's rope to complain to the owner about dropping his anchor in the wrong place, with SpongeBob and Patrick following behind him.

They find out that the anchor was dropped from the Flying Dutchman's ship. As the trio investigates the ship, the Flying Dutchman emerges from his cabin, terrifying Squidward. Unperturbed and oblivious, SpongeBob tells the Dutchman of Squidward's intentions to complain to him, earning Squidward a scorching. The Dutchman prepares to do the same to SpongeBob and Patrick, and they attempt to jump overboard but land back on the ship every time they try. The Dutchman explains to them that for setting foot on his ghost ship, they shall be forced to work as his ghostly crew for all eternity.

Squidward proceeds to complain about this, so the annoyed Dutchman tosses him into the Fly of Despair, a zipper-like portal leading to a chaotic dimension. Watching their screaming friend disappear in the unknown realm, SpongeBob and Patrick are frightened into submission, helping the Dutchman in his quest to terrorize the citizens of Bikini Bottom. However, the pair's idea of terror proves incompatible with the Dutchman's, so the ghost reveals that they won't be his crew. SpongeBob asks if they will be released, but the Dutchman states his true nature of informing them that they will be eaten as their reward. Locked in their room, SpongeBob and Patrick's only avenue of escape is the dreaded "perfume department." Surviving this ordeal, they manage to steal the Flying Dutchman's dining sock, which they overheard that he cannot eat without.

The Flying Dutchman catches the two as they try to escape. However, he is unable to hurt them without damaging his sock. Therefore, SpongeBob and the Dutchman begin fighting over the sock until the elastic threatens to give. The Flying Dutchman decides to grant them three wishes in exchange for the sock's safe return. Patrick wishes he knew about this earlier, thus setting the clock back one minute and using up the first wish. Although initially irritated, SpongeBob, in his excitement, wishes that Squidward was with them. Squidward, who managed to pass through the Fly of Despair and arrive safely home, is immediately transported back to the Dutchman's ship, in which the two see he is still alive, realizing that he escaped from the Fly of Despair. The trio begins arguing over who shall get the last wish until the Dutchman uses his method of choice, which he calls his "mystic other-worldly powers", to decide (which is actually the eeny-meenie-minie-mo method).

Patchy returns to greet the audience. After a totally random outburst in which he tells the audience to walk the plank, he announces that they are going to read a fan letter. Unfortunately, Potty shows up, adorned with a burning fuse from an unplanned explosives stunt. Potty and Patchy are blown up and the latter decides to close the show.

The episode is 15 minutes long, longer than an average length of a short but shorter than a 22-minute episode. The episode was later featured on the Sea Stories VHS and DVD releases, after being shown on television. The Sea Stories DVD release featured all three endings (see below).

When this episode was first aired, segments with Patchy the Pirate were shown to announce a poll that was held that lets viewers decide between three possible endings to the episode, with a different character receiving the final wish in each end.

After the commercial break, Patchy introduced the two alternate endings that were shown before SpongeBob's ending.

Patrick: He wishes that he had gum that never lost its flavor, and thus, they are eaten by the Flying Dutchman, begging him to let them out.

Squidward: He wishes that he had never met SpongeBob and Patrick. They get eaten and are still introducing themselves in the Dutchman's belly.

Patchy then states that if the viewer watches the episode "Land Lubin' style" (as a rerun), Nickelodeon will only play the voted ending. He also calls the viewer an official big-time decision-maker and a video of monkeys playing instruments is shown. Patchy says not to let it go to the viewer's head and signs off.

Since then, the Patchy voting footage has never aired again. The Patchy segments without the voting mentions are called "Patchy's Pick" which was shown on the Sea Stories VHS and The Complete 2nd Season DVD, and the footage with the voting was shown on The First 100 Episodes DVD eight years later and on The Best 200 Episodes Ever DVD ten years later. The footage with the voting was once again shown on Paramount+, until it was replaced with the 15-minute version sometime after.

In all future airings of this episode, only the SpongeBob ending is shown. The episode is paired with "Gary Takes a Bath," which is shorter than a regular 11-minute episode.

Early SpongeBob "You wish" Title card for this episode 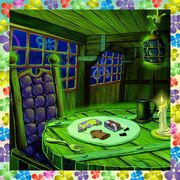 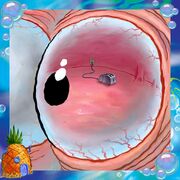