"Frozen Face-Off"
"Sentimental Sponge" is a SpongeBob SquarePants episode from season 8. In this episode, SpongeBob struggles to part with some items because of the memories they evoke.

In the beginning of the episode, it is spring cleaning day, and SpongeBob works diligently on his house. When he takes out his garbage, Patrick reprimands him for letting go of all these sentimental items and saying they still have values to them. After pondering the concept, SpongeBob agrees and fights the garbage truck's claw for his trash.

The next day at the Krusty Krab, SpongeBob begins collecting random items such as mayonnaise, sweat, ketchup packets, gum from under the tables, grill grease, chewed-up bendy straws, and order tickets. Soon, he becomes a hoarder, but he runs out of the room and starts piling it in his front yard. Squidward starts to get annoyed by his new habit and tells him that he has to throw away his "junk." SpongeBob tells him that he cannot because they hold too many memories, but is unaware he is hoarding.

Squidward then calls the sanitation police. They condemn the house because it is filled with junk and that SpongeBob is a "threat to public health." They tell him he has to evacuate the pineapple immediately. Squidward is happy until they condemn his house for being filled with SpongeBob's "junk." When SpongeBob asks the police if there is anything he can do, they tell him what he can do. SpongeBob has to choose to evacuate the pineapple or throw away his "junk."

SpongeBob decides to throw them away, but he takes pictures of everything first. Squidward is then happy again and plans to go back to bed. But he discovers that SpongeBob took so many pictures that he put some of his pictures in Squidward's house, without Squidward's permission, and all the pictures flood Patrick, Squidward, and SpongeBob's front yards. Patrick then compliments Squidward on his "dress," only for Squidward to angrily correct him and state that it is a nightshirt, as the episode ends.

Production for this episode and its sister episode were finished on January 10, 2011.[1] 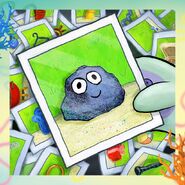