"Selling Out" is a SpongeBob SquarePants episode from season four. In this episode, Mr. Krabs retires and leaves the Krusty Krab under new management. 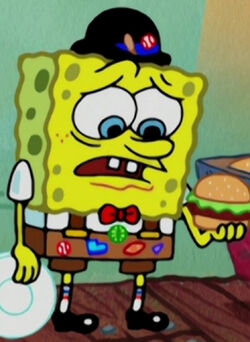 The episode starts with Mr. Krabs singing about his love and greed for money. Then, an extremely rich man named Howard Blandy comes into the Krusty Krab and asks to buy the restaurant from Mr. Krabs for a large sum of money. Mr. Krabs happily accepts, leaving SpongeBob and Squidward with a simple "See you around," causing SpongeBob to cry hysterically. SpongeBob and Squidward leave the Krusty Krab to ask Mr. Krabs what is happening, he then tells them that he is retiring.

Afterwards, a new manager named Carl comes to them, renaming The Krusty Krab "Krabby O'Monday's." Mr. Krabs drives by, but ignores it, instead going to the newly opened Bikini Bottom Hook Museum, then when he is trying to paint a bowl of fruit, he actually paints a bowl of Krabby Patties instead, followed by a round of golf; however, he then realizes that he hates golf. Mr. Krabs has done everything he wanted to do and decides to go home, where he realizes he has nothing to do. He tries to talk to his daughter, Pearl, but Pearl kicks Mr. Krabs out of the house and tells him to get a job, a hobby, or some friends.

Downtrodden, Mr. Krabs goes to the beach to look for a job, but hits a glass door, with a sign saying "Help Wanted." It is one of the glass doors of the Krabby O'Monday's, so he goes inside to take a look at what job is vacated.

Meanwhile, Carl wants Squidward to have more spirit, so he threatens Squidward with Human Resources.

Fearful, Squidward continues his work with a forced smile. Mr. Krabs gets a job at the Krabby O'Monday's working as a busboy, listening to SpongeBob complain about the problems. The problems are that the patties are processed and there is an automated cash register, with no one watching it. Angered, Mr. Krabs complains, only to be ignored by Carl. He also finds out how the new patties are synthetically engineered, fake and disgusting.

Now furious, Mr. Krabs shows the customers what the food is actually made of and the customers find out that the patties are made out of gray material. So they run away, making the restaurant unpopular. Carl calls Howard to tell him what Mr. Krabs is doing. Mr. Krabs plugs the fake patty maker up, but escaping, processing slush and the pressurized air inside cause the whole restaurant to explode.

Mr. Krabs retakes ownership of the destroyed restaurant by giving all his money back to Howard and changes the restaurant's name back to "The Krusty Krab," saying that he got back the love of his "dear friends," that is until the episode ends with a demand for Squidward and SpongeBob to clean up the mess. Then Mr. Krabs presses the cash register, causing dollar bills to appear on the screen, making it black and ending the episode.

Retrieved from "https://spongebob.fandom.com/wiki/Selling_Out?oldid=3144382"
Community content is available under CC-BY-SA unless otherwise noted.