View source
If you were looking for the article about the DVD, then see The Complete Ninth Season.

Season 10
The ninth season of SpongeBob SquarePants, created by former marine biologist and animator Stephen Hillenburg, was announced on January 3, 2011.[1] Season 9 first aired on July 21, 2012 with the episodes "Extreme Spots" and "Squirrel Record" and ended on February 20, 2017 with "Goodbye, Krabby Patty?" The season was released on DVD on October 10, 2017, nearly eight months after it had completed broadcast on television. This season was executive-produced by series creator Hillenburg and writer Paul Tibbitt, who also acted as the showrunner.

A total of 26 episodes were produced for this season, bringing the number of episodes up to 204, passing the 200-episode milestone. This season marks the show's transition to 1080i HD by now having episodes produced and aired in widescreen (16:9), the native aspect ratio of high-definition.

The season aired on Nickelodeon, which is owned by Viacom, and was produced by United Plankton Pictures and Nickelodeon. The season's executive producers were series creator Stephen Hillenburg and Paul Tibbitt, who also acted as the series' showrunner.[2][3] During production of the eighth season, Deadline.com reported on January 3, 2011 that Nickelodeon had renewed the series for a ninth season, with 26 episodes in order, which would push the series over the 200th episode mark.[4][5][6][7][8][9] SpongeBob SquarePants became the Nickelodeon series with the most episodes, surpassing Rugrats with 172 episodes, having 178 after the eighth season had complete broadcast on television.[10]

In a statement, Brown Johnson, president of animation for Nickelodeon and MTVN Kids and Family Group, said "SpongeBob's success in reaching over 200 episodes is a testament to creator Stephen Hillenburg's vision, comedic sensibility and his dynamic, lovable characters. The series now joins the club of contemporary classic Nicktoons that have hit this benchmark, so we're incredibly proud."[4][11][12][13]

Series creator Stephen Hillenburg executive-produces the show alongside Paul Tibbitt, who has worked on the show since after the pilot.[4] Tibbitt served as a director and writer on for its first 3 seasons and eventually taking over the showrunner position from Hillenburg.[4] Tibbitt said, "We never imagined we would be on for that long but we're going to keep going. The trick is to try to keep the episodes funny and simple and press from there."[4][14]

On July 21, 2012, the season premiered with the episodes "Extreme Spots" and "Squirrel Record" during a SpongeBob SquarePants television marathon event called "The Super Spongy Square Games." The episode "Extreme Spots" was written by Luke Brookshier, Marc Ceccarelli, and Derek Iversen, while Tom Yasumi served as animation director. It was guest starred by actor Johnny Knoxville.[15][16][17][18] Moreover, "Squirrel Records" was written by Brookshier, Ceccarelli, and Iversen, and was directed by Alan Smart. During the television event, Nickelodeon also debuted two more episodes—"Demolition Doofus" and "Face Freeze!"—of the eighth season.[15][16][17][18]

Vincent Waller had confirmed on his Twitter account that production on the show has halted halfway through its ninth season, due to working on The SpongeBob Movie: Sponge Out of Water, but has recently resumed and continued to work on the rest of this season.[22] Also, according to an interview with Princess Grace Foundation-USA, creator Stephen Hillenburg says he would return to the show following production on the second film adaptation, The SpongeBob Movie: Sponge Out of Water.[23]

On September 21, 2014, Vincent Waller tweeted that production of season 9 was halted halfway through to concentrate further on The SpongeBob Movie: Sponge Out of Water. He stated that season 9 went back in production again. This is why season 9 had been taking over 2 years to finish broadcast on television.[24]

On May 29, 2015, Sherm Cohen released two storyboard images from a proposed season 9 episode.[25][26] It was later revealed that they belong to "What's Eating Patrick?"

On June 5, 2015, Nickelodeon tweeted that "Stephen Hillenburg is back at Nickelodeon Animation Studios & there's a new [episode] on July 16!"[27] This new episode was a continuation of season 9. This also supports an announcement by ViacomCBS that 20 new episodes were suppose to be released during summer 2015.[28][29][30] However, only five episodes — "Lost in Bikini Bottom"/"Tutor Sauce," "The Executive Treatment"/"Squid Plus One" and "Pull Up a Barrel" — premiered before the end of September 22, 2015, which is the last day of summer.

On June 23, 2015, Kaz Prapuolenis posted on Facebook an image of a "Kaz Underworld-inspired background for an upcoming SpongeBob episode, further stating that it's "the bad part of town".[31] 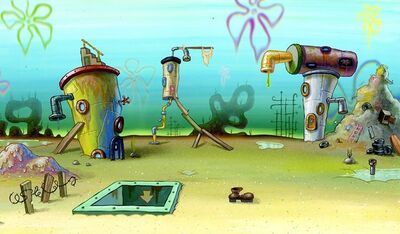 The previous day, Nickelodeon tweeted a GIF image which was presumed to be new footage from a future season 9 episode. These images were revealed to be from "Lost in Bikini Bottom."[32]

On September 4, 2015, Vincent Waller on Twitter revealed that "Krabs' Army" and "SpaceBob InvaderPants" - two rumored episodes since the end of the first half of season 9 - were actual episodes, but ended up being scrapped because "they didn't feel like they were worthy of the attention."

On December 9, 2015, Vincent Waller on Twitter released two screenshots from a future season 9 episode.[33] These images were revealed to be from "Married to Money."[34]

On June 10, 2016, Vincent Waller on Twitter released a screenshot from a future season 9 episode.[37] On the same day, the image was revealed to be from "Food Con Castaways."[38]

On July 13, 2016, Vincent Waller on Twitter released 2 screenshots from a future season 9 episode.[39] On the same day, these images were revealed to be from "Bulletin Board."[40]

On October 25, 2016, Vincent Waller on Twitter released two screenshots from a future season 9 episode. These images were revealed to be from "Goodbye, Krabby Patty?," which was at the time known as "Factory Fresh."[41]

In addition to the regular cast members, episodes feature guest voices from many ranges of professions, including actors, musicians, and artists. For instance, the season premiere, "Extreme Spots," was guest-starred by American stunt performer and actor Johnny Knoxville voicing the character of Johnny Krill. The writing staff wrote the episode specifically for Knoxville.[42] Executive producer Paul Tibbitt said, "[Nickelodeon] wanted to do a show about extreme sports and the first thing that came to mind was Johnny Knoxville, because there are few humans living that are as extreme as him." Knoxville accepted the role because he is a fan of the show.[43][44] Ernest Borgnine and Tim Conway returned, reprising their respective roles as Mermaid Man and Barnacle Boy in "Patrick-Man!" The episode was Borgnine's last voice-over work for the series, as on July 8, 2012, he died at the age of 95. In "License to Milkshake," comedian and Spinal Tap band member Michael McKean guest-starred as the voice of Captain Frostymug.[45][46] Rapper Biz Markie guest-starred as Kenny the Cat in the episode of the same name.

In a DVD review for a season release, Paul Mavis of DVDTalk was positive on the episode "Extreme Spots," writing "[It] gets big laughs from some very funny bits, including a motorcycle ripping off SpongeBob's arms, and SpongeBob's pathetic attempts at 'extreme jump roping' and 'extreme pillow fighting.'"[21] However, the episode "Squirrel Record" was described by Mavis as "the weakest entry" on the set.[21]

The episode "SpongeBob You're Fired" was criticized for its line that refers to the Supplemental Nutrition Assistance Program (Food Stamps benefit).[47] In a scene from the episode, Patrick tries to show SpongeBob the benefits of being unemployed, at which he said in response, "Unemployment may be fun for you, but I need to get a job."[48] The scene was meant to demonstrate the title character's "eternal optimism and willingness to get back to work," and "do it in a way that's still funny and relatable." However, it was reported that political activists claim the "notorious line" as a "slam" to the Food Stamps benefit. In a report by The Hollywood Reporter, it stated there that the episode may have a political agenda about the social safety net.[49] It added that "It's not the first time SpongeBob has waded into social commentary, though usually when it does, it bugs the right and supports the left."[49]

Nickelodeon declined to comment on the issue caused by the message of the episode.[50] However, Russell Hicks of Nickelodeon said the show is "tapping into the news of the moment, but did not specifically address any political leanings or ideologies within the episode." In a statement, Hicks said "Like all really great cartoons, part of SpongeBob's long-running success has been its ability to tap into the zeitgeist while still being really funny for our audience. As always, despite this momentary setback, SpongeBob's eternal optimism prevails, which is always a great message for everyone."

The episode "Gary's New Toy" received a nomination at the 2013 Golden Reel Awards for the Best Sound Editing - Sound Effects, Foley, Dialogue and ADR Animation in Television category.[51] The show itself received several recognitions. At the 40th Daytime Emmy Awards, the series was nominated for Outstanding Achievement in Sound Editing - Animation.[52] The show won the 2013 Kids' Choice Awards for Favorite Cartoon.[53] It also won the ASCAP Film and Television Awards for Top Television Series.[54] At the BMI Film TV Awards, the show won the BMI Cable Award.[55] Sarah Noonan was nominated at the Artios Awards of the Casting Society of America for her work.[56]