Not to be confused with Snail Mail.
Book
Gallery

SpongeBob and Patrick are decorating SpongeBob's house, when suddenly a package is delivered in the mail. SpongeBob wants to open the package, but Patrick stops him because it says, "For SpongeBot SquashPants." They start arguing because SpongeBob thinks it is misspelled. While arguing, Patrick trips over SpongeBob's Krabby Patty sculpture and the box falls open.

A hat with a note "from Mom" falls out. The hat fits SpongeBob perfectly, so he and Patrick assume the package really was meant for him. The doorbell then rings and SpongeBob opens it, and a robot named SpongeBot SquashPants comes for his hat.

The book has seven sounds.

A close up of the Dutch sound part 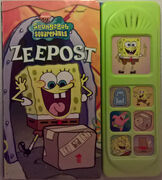 The Dutch version of the cover 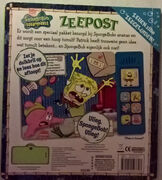 The Dutch version of the back 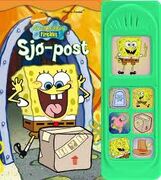 The Norwegian version of the cover
Add a photo to this gallery
Retrieved from "https://spongebob.fandom.com/wiki/Sea_Mail?oldid=2371393"
Community content is available under CC-BY-SA unless otherwise noted.