"Scaredy Pants" is a SpongeBob SquarePants episode from season one. In this episode, SpongeBob becomes a ghost for Halloween.

It is Halloween in Bikini Bottom, and SpongeBob is cleaning the dishes in the Krusty Krab at the end of the workday. He becomes frightened by the creepy door closing and a message reading "BOO" on the order slips.

After he finishes, he begins to run away, but Mr. Krabs stops him and asks him if he wants to hear his "annual scary story," and he then does. He tells the story of "The Flying Dutchman," a ghost who steals souls on Halloween. Squidward, dressed up like the Flying Dutchman, appears behind SpongeBob, saying that he will steal his soul, terrifying him. SpongeBob, who has a reputation for being easily scared, is then nicknamed "SpongeBob ScaredyPants," rushes home, and is scared by everything he sees on the way.

After being accidentally scared by Patrick wearing Groucho glasses, he asks him for help. They make a "Flying Dutchman" costume, but it fails to scare anyone. SpongeBob realizes that a real ghost has a round head and that he has a square one. Patrick shaves SpongeBob's head, making it round. Believing themselves to be scary, SpongeBob and Patrick go around town attempting to scare people, and believe themselves to be successful in doing so, although their "victims" are simply confused by their antics.

They then go to the roof of the Krusty Krab where a Halloween party is taking place, turn off all the lights, and lower SpongeBob with a rope, with Patrick providing the voice of the "Dutchman," which initially terrifies everyone. However, when a jellyfish stings Patrick, whom the rope is tied to, he starts running around in pain, causing SpongeBob to fly around uncontrollably, exposing his true identity.

Everybody starts laughing at SpongeBob, but soon the real Flying Dutchman appears. He explains to them how offended he is by people dressing up as him for Halloween, and that SpongeBob's costume is the worst of all. Before he is about to steal the souls of everyone present, the Flying Dutchman first takes off SpongeBob's costume, which reveals that his brain is exposed as a result of Patrick's shaving.

The Dutchman flees in terror. Subsequently, everyone runs away from the Krusty Krab screaming, leaving SpongeBob satisfied to finally have succeeded in scaring people. Patrick comments on SpongeBob's "pink hat," and SpongeBob explains that it is not a hat; it is his brain, and Patrick also screams and runs away. SpongeBob reassures that it will grow back and the episode ends. 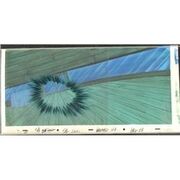 An unused shot of SpongeBob with his brain exposed.
Add a photo to this gallery


Retrieved from "https://spongebob.fandom.com/wiki/Scaredy_Pants?oldid=2547220"
Community content is available under CC-BY-SA unless otherwise noted.