Sandy, SpongeBob, and the Worm

View source
If you were looking for the article about the puppet version of this episode, then see Sandy, SpongeBob, and the Worm: Puppet Edition!.

"The Algae's Always Greener"
"Sandy, SpongeBob, and the Worm" is a SpongeBob SquarePants episode from season 2. In this episode, a giant worm threatens Bikini Bottom, but when Sandy is not afraid to fight it, SpongeBob tries to convince her not to go.

In the middle of the night, an unseen creature lurks into Bikini Bottom and causes havoc, taking gigantic bites out of everything in sight. Soon it appears at SpongeBob's house and decimates the pineapple, and SpongeBob wakes up just in time to see the beast. The next morning at the Krusty Krab, he tells the frightened crowd of the Alaskan Bull Worm that he saw, and the townspeople corroborate his tale of woe. They all agree that they need a plan to protect themselves from this monster.

Mr. Krabs tries to take advantage of the situation and make cash by selling Krabby Patties, but he is immediately pelted with ketchup and mustard bottles by the outraged crowds, because of his greed. As everyone struggles to plan, Patrick suggests physically pushing the whole town to a safer location, but this idea is immediately shot down by Squidward. Among the other suggestions is that someone should take on the beast and that someone willing to do the job turns out to be Sandy. She shows the crowd that her tail has also been eaten by the worm, and vows to go defeat the beast to get her tail back. Nearly everyone cheers, but SpongeBob is terrified, and asks Sandy to reconsider. Sandy refuses to listen to his pleas and rushes out, so SpongeBob goes after her. The townspeople then decide, as a backup plan, to follow Patrick's suggestion and start shoving the city out of harm's way.

SpongeBob catches up to Sandy and again tries to dissuade her from her crusade. Sandy scoffs at his fears, sure of her own strength and of the need to retrieve her tail. SpongeBob meekly informs her that he is the one who has her tail, but when she asks to see it, all he can produce is a paperclip and a piece of string. Nevertheless, he keeps trying to stop her from proceeding. Nothing he does slows her down, so he begs her not to go there, that she has no idea what she's up against. Sandy, annoyed at SpongeBob's constant worrying, commands him to agree that there is no animal too big or dangerous for her to handle.

They reach a large, moist cave that seems to be the lair of the worm, and against SpongeBob's protestations, Sandy heads inside to do battle with the creature. She manages to wrangle the wriggly monstrosity and tie it in a knot, proudly presenting it and her reunited tail to SpongeBob, saying she knew no worm was a match for her. However, SpongeBob timidly points out that what she is defeated is not the Alaskan Bull Worm, but rather its tongue. After contemplating the fact that the cave itself is actually the worm, Sandy sagely decides to hightail it.

The giant worm angrily gives chase, but even as SpongeBob and Sandy run for dear life, SpongeBob cannot help but point out he was right all along about the worm being too much for her to handle, coercing Sandy into admitting it, and she does after a while. Still needing a way to escape, Sandy takes the paperclip and string SpongeBob showed her earlier, and uses them to snag a branch of coral. She swings them out of the charging worm's path, leaving it to hurtle off a cliff. Sandy and SpongeBob congratulate themselves and head off to inform the town of the worm's defeat.

Meanwhile, the townspeople have finished moving the city to the bottom of the cliff and give a cheer thinking it is perfect, just as the plummeting worm lands right on top of it, destroying it, and utters a pitiful "Ouch" as the episode ends. 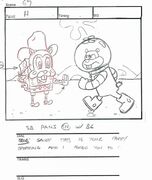