"Squeaky Boots"
"Sandy's Rocket" is a SpongeBob SquarePants episode from season 1. In this episode, after SpongeBob and Patrick sneak onto Sandy's rocket ship, they mistake Bikini Bottom for an extraterrestrial disguise.

SpongeBob visits Sandy's treedome, and then sees that Sandy has built a rocket ship. Sandy explains to him that she is going to the moon, and SpongeBob begs her to take him with her. Although she immediately insists that he cannot come and that this trip is for science and not for fun, and also tells him that there is not enough room for him, SpongeBob's begging ultimately convinces her to let him come with her.

That night, Patrick comes to SpongeBob's house and gives him some "Alien Repellent," which they sneak into Sandy's treedome to spray on the windows. Even though they agree to only spray the windows, Patrick inadvertently enters the rocket, and SpongeBob follows. After playing with the ship's various features, SpongeBob accidentally starts up the rocket and it starts to launch, which makes Sandy wake up and figure out the cause. SpongeBob and Patrick fall right down the rocket. Luckily, the lack of gravity takes over them while they're in outer space. The ship loops over the moon a few times and falls back down to Earth, then crashes back to Bikini Bottom (next to SpongeBob's house). SpongeBob and Patrick convinced that they're now on the Moon, think that the aliens are projecting their memories onto the environment to trick them.

They begin catching everyone with Sandy's net guns (intended for harvesting moon rocks), believing the citizens of Bikini Bottom are aliens. Eventually, they capture everyone in Bikini Bottom. When Sandy arrives and tries to chew them out for ruining her experiment, SpongeBob and Patrick shoot their net guns at her, capturing her too. Sandy attempts to explain the truth to them, but they slam the door in her face. Suddenly, SpongeBob is convinced that Patrick is an alien. Patrick attempts to shoot him before he has a chance to capture him but ends up shooting and capturing himself (he had his net gun pointed the wrong way). SpongeBob starts the rocket again to return home, and when it reaches the moon, the rocket crashes on top of it, having run out of gas. Noticing that things are different, SpongeBob looks out the window to see the Earth where he realizes his mistake. All the Bikini Bottomites, who are being stored in the cargo hold of the ship, end the episode saying: "SpongeBob, we aliens would like a word with you."

SpongeBob and Patrick in their spacesuits were designed by Todd White.[3] 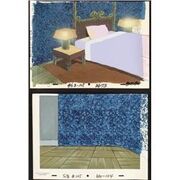 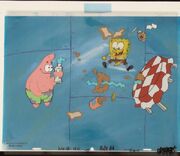 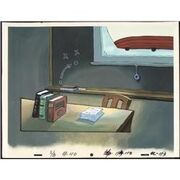 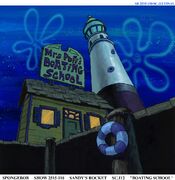 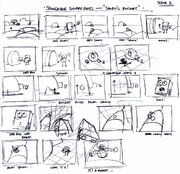 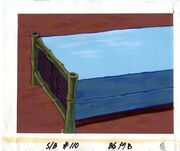 
*On The Complete 1st Season and The First 100 Episodes DVDs, "Mavericks" is replaced with "Sharkskin" by The Surfdusters. On the Home Sweet Pineapple DVD and VHS versions, TV airings, and the Amazon Prime Video version, the "Mavericks" music is left intact.