"Shell Shocked"
"Sand Castles in the Sand" is a SpongeBob SquarePants episode from Season 6. In this episode, SpongeBob and Patrick use their sand creations to battle each other.

SpongeBob and Patrick plan to go to the beach for the entire day. They decide to take the bus. Throughout the ride, they anger the driver and passengers with their enthusiasm, causing the driver to kick them off before they can start singing. The two believe they're lost until SpongeBob is hit by a Volleyball, indicating that they made it. As they play on the beach, they inadvertently destroy the life guard tower. The life guard, angry, suggests they play in the sand somewhere else.

Later on, the two decide to build sand castles. After Patrick destroys SpongeBob's sand castle, SpongeBob draws a dividing line between them to end their dispute, but in vain. Patrick builds a castle on top of the line. SpongeBob damages the sand castle, only for Patrick to retaliate by destroying his again. 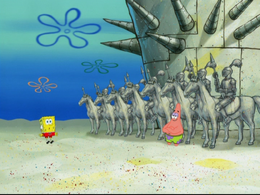 SpongeBob reconstructs his castle, but to a massive scale that rivals the size of an actual castle. Patrick responds by building one of his own. SpongeBob, hoping to avoid an all-out war, writes a peace treaty. Patrick signs it, but then later changes his mind, saying it "isn't worth the sand it's printed on" after he fires an arrow at SpongeBob's fortress. SpongeBob, in turn declares war on Patrick and begins to improve the durability of his fortress. While he is doing so, Patrick builds an army of horse-mounted knights.

SpongeBob in self-defense builds a catapult and uses it against the knights as they storm towards him. He then summons his own troops to attack Patrick. Patrick retreats into his castle and returns with a cannon, in which he attacks SpongeBob's hit squad. The hit squad retreats, and SpongeBob manages to get them safely back inside his own fortress. It is in vain, however, the cannonball finds its way over the fortress wall and smashes them.

SpongeBob in retaliation builds a tank to destroy Patrick's fortress, while Patrick comes with a giant robot. The tank and the robot clash, and the robot gains the upper-hand by picking up SpongeBob's tank. As it prepares to crush the tank, SpongeBob fires the tank's cannon monsters and destroys Patrick's robot. He for the next moment thinks he is victorious, but Patrick returns on the robot's head, which has separated from the body and is now an airship.

SpongeBob pulls out a remote control and pushes a button on it, calling in a fighter jet which he hops into the cockpit and takes control of. As Patrick tries to run, SpongeBob has two missiles from the fire jet chase him. Civilians on the beach begin to flee in terror. Patrick deploys a surface to air missile launcher from underneath the ground. He has it fire its eight loaded missiles at SpongeBob, destroying the two missiles that were chasing Patrick in the process. SpongeBob takes evasive maneuvers and manages to get them to fly into Patrick's fortress, completely destroying it. Patrick in a final act of retaliation uses his airship to blow up SpongeBob's fortress. SpongeBob is extremely enraged by this, and putting all sensible options aside, he flies his fighter jet into Patrick's robot head airship, destroying both aircrafts and hurting Patrick and himself.

SpongeBob and Patrick are lying wounded on the beach, apologizing to each other for trying to destroy the other. The life guard shows up and furiously points out the mess of debris and destruction left by the fight as the two see they went too far. The lifeguard demands they clean up after handing them brooms. They do as he says, tidying the beach up to its original condition but soon begin to compete with each other over who could do so faster as dusk approaches.

Retrieved from "https://spongebob.fandom.com/wiki/Sand_Castles_in_the_Sand?oldid=3418550"
Community content is available under CC-BY-SA unless otherwise noted.