"Pull Up a Barrel"

"What's Eating Patrick?"
"Sanctuary!" is a SpongeBob SquarePants episode from season 9. In this episode, SpongeBob takes care of stray snails and takes too many of them.

Gary finds a stray snail behind a rock while being walked by SpongeBob. They bring her back home to take care of, and name her Señor Poopus.

Patrick arrives and tells SpongeBob that he found some stray baby snails, so he takes care of them as well. Later, the mom of the baby snails finds her children. Patrick comes with another fish who has a stray snail, and eventually many snails are sent to SpongeBob for nurturing.

He ends up having to stay home from work so he can take care of the snails, so none of the customers at the Krusty Krab can get their food. Mr. Krabs goes to SpongeBob's house to find out what is going on, but gets shocked when he sees what has happened to him.

Squidward gets allergies because of SpongeBob's snails, and learns that he has many of them. Meanwhile, Patrick is sad that he is only hanging out with his snails, so he becomes a snail himself, only to end up regretting this decision when SpongeBob takes him.

Squidward eventually calls the Bob Barnacle Snail Center to settle the snail issue as well as end his allergies. He convinces SpongeBob to give up his snails to him so he can take care of them. He goes back to normal and realizes what Bob is talking about, finally letting all the snails go, with the addition Señor Poopus is really a girl snail named Esmerelda. Soon he is back to having just Gary as his snail, although he accidentally gives Patrick to Bob and runs after the truck to adopt him, as the episode ends.

Vincent Waller confirmed this episode on Twitter on September 3, 2015.[2]

After when SpongeBob says, "I'm gonna take 'em [the snails] home and feed them." In the storyboard version, there is a piece of kelp next to Patrick, but in the final version, it is not there. 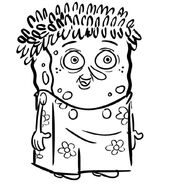 Concept art with a text saying WHATEVER.