"SB-129" is a SpongeBob SquarePants episode from season one. In this episode, Squidward accidentally freezes himself for 2,000 years and experiences complications while using a time machine.

Early one Sunday morning, Squidward goes to his open window, prepared to play his clarinet. However, SpongeBob's alarm clock goes off at the same time, causing his clarinet to be jammed deep in his throat. SpongeBob awakes and asks Squidward if he'd like to go jellyfishing, taking Squidward's squeals of protest as a "yes." After finally dislodging the clarinet, Squidward answers the knocking of his door to find SpongeBob and Patrick waiting for him. When he refuses to come out, they believe it is because he is preparing to go jellyfishing and repeatedly ask him if he is ready.

Squidward asks SpongeBob why he is not at work, to which SpongeBob sadly replies that the Krusty Krab is closed on Sundays. Coming up with an idea, Squidward tells them to wait for him, closes the door, then sneaks out the back and heads for The Krusty Krab. It is indeed deserted, but as Squidward takes in a breath to play, SpongeBob and Patrick arrive calling for him. Squidward runs to the kitchen and hides in the storage freezer. When SpongeBob and Patrick cannot find him, they assume he already went to Jellyfish Fields and leave. Squidward makes to exit the freezer, but finds that the door will not open. He feels slightly concerned, but also confident that someone will notice him missing and find him soon enough.

2,000 years later, Squidward remains in the freezer, frozen solid. The door's rusted hinges give way and Squidward falls to the floor. SpongeBob with jet boosters hovers by and sees the frozen cephalopod, takes out a hammer, and proceeds to use the hammer's laser function to thaw Squidward out. Dazed and slightly burnt, Squidward asks if his rescuer is SpongeBob, who answers that he is actually SpongeTron. Squidward discovers that he is in the future, where the world is covered in chrome and SpongeTron is but one of 486 clones. Horrified at this prospect, Squidward begs for a way to get back to his own time. SpongeTron directs him to a time machine located next to a room-sized can opener. Squidward decides that if he cannot escape "SpongeBob" in the future, he will travel to a time before SpongeBob was born, simply referred to as the "past."

The time machine arrives in the primordial sea. Squidward walks among the ancient sea creatures, hopeful that he can finally play his clarinet in peace. However, a shadowy figure pursues him, soon revealing itself to be a Primitive Sponge. The Primitive Sponge tentatively examines Squidward, who tries to back away but is halted by the presence of a Primitive Star. The two remain curious about Squidward, but are soon distracted by a jellyfish, which they are visibly frightened of. Taking his chance to get away, Squidward tries to play once more but is constantly interrupted by the screams of the primitives, who are zapping themselves with the jellyfish in their hands. Squidward has them hand over their loincloths, of which they have plenty, and proceeds to fashion jellyfish nets for them. Amazed by Squidward's demonstration of jellyfishing, the primitives take the nets in earnest.

With nothing left in his way, Squidward begins to play at last. However, the wailing of the clarinet drives the primitives mad with rage, and they chase after Squidward. Barely making it back to the time machine, Squidward jams the lever up and down and breaks it, sending the machine hurtling through dimensions before arriving to a world of emptiness. Squidward is glad to have somewhere he can be alone, but the voices that repeat "alone" prove too much for him to bear. After searching all across the void, he finally crashes into the time machine and bangs the controls, wishing for it to take him back home, even if he has to see SpongeBob.

At his words, the time machine returns Squidward to his home with SpongeBob and Patrick awaiting him. Squidward quickly recounts his adventures and tells the two how much he has missed them. When they ask him if he is finally ready for jellyfishing, however, Squidward soundly refuses and demands to know who invented such a foolish game in the first place. They happily remind him that it was, in fact, he who invented it, and Squidward, realizing he inadvertently committed a temporal paradox, deeply considers going back. 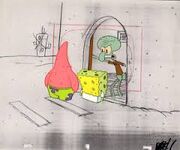 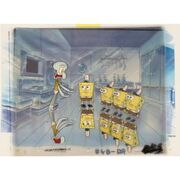 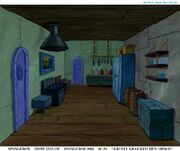 Retrieved from "https://spongebob.fandom.com/wiki/SB-129?oldid=1975992"
Community content is available under CC-BY-SA unless otherwise noted.