1999 - present
Rodger Dale Bumpass (born on November 20, 1951; age 70) is an American actor and voice actor. He is a main cast member for the SpongeBob SquarePants franchise, voicing Squidward Tentacles. Bumpass also provided voices for characters from Chalkzone, Invader Zim, Where on Earth Is Carmen Sandiego? and Dr. Arthur Light in Teen Titans and its reboot version Teen Titans Go!

Bumpass makes live-action cameos in "Truth or Square" as a security guard, "Goons on the Moon" as the storyboard artist, and in "SpongeBob's Big Birthday Blowout" as one of the employees at the Trusty Slab.

The following is a list of works where Rodger Bumpass played a role, outside of the SpongeBob SquarePants series.

Bumpass was born in Jonesboro, Arkansas on November 20, 1951. He attended Little Rock Central High School, where he received his first training in theater. He then attended Arkansas State University during his college years, where he majored in Radio–TV and minored in theater.

He worked at the campus radio station and also at Jonesboro's Raycom Media owned ABC-affiliated television station, KAIT-TV, where he had multiple duties as announcer, film processor, cameraman, audio technician, and technical director.[1]

While at KAIT, he also wrote, produced, and performed in a late-night comedy program called Mid-Century Nonsense Festival Featuring Kumquat Theater.[2] He graduated from A-State in 1976, and when encouraged by an A-State professor to consider professional theater, he went to New York in June 1977.[1]

In 1977, he won a role in the National Lampoon music and comedy road show That's Not Funny, That's Sick and toured with them until 1978. That same year, he appeared in the TV special Disco Beaver from Outer Space for HBO.

In 1979, Bumpass was awarded the leading role in a National Lampoon film to be called Jaws: 3 People: 0, in which he would have a love scene with Bo Derek. However, the film was canceled due to objections by the creators of the film Jaws.[1]

In 1980, Bumpass created the character of 'Fartman' to appear on the National Lampoon LP The White Album, which later inspired the Howard Stern character by the same name.[3]

Bumpass is best known to present-day viewers as the voice of Squidward Tentacles, Dr. Gill Gilliam, the Purple Doctorfish, and the anchovies on SpongeBob SquarePants.[4][5] He is also known for voicing The Chief from Where on Earth Is Carmen Sandiego?, Dr. Light on Teen Titans, and Professor Membrane on Invader Zim.[1] Though he has been voicing and acting in films since the 60s, and had also appeared on stage through the mid 70s until the late 80s.[1][6][7]

On January 15, 2016, before 11:00 P.M., Bumpass was arrested with suspicion of driving under the influence at Burbank, California. Officers alleged that they found Bumpass slumped inside his blue Chrysler PT Cruiser in the middle of the road. After attempting to walk away, he confessed to drinking at a bar before driving, and was soon handcuffed after failing a sobriety test. His blood alcohol levels were reportedly twice the legal limit in California. He was released the following day on a $15,000 bail.[8][9] The incident was first reported by celebrity gossip website TMZ several days later, on January 19.[8] The following day, Bumpass alleged to the website that the police had lied about the DUI report, claiming that he was not slumped in the vehicle when he was spotted, and that he was being tailed and pulled over before his arrest, though he confessed again to drinking. Nickelodeon representatives were notified of the incident by Bumpass, but did not release any immediate comments or actions regarding the matter.[10]

On January 25, 2016, ten days after the incident, Nickelodeon representatives confirmed to TMZ that Bumpass would remain on SpongeBob SquarePants for the foreseeable future. The representatives alleged that the network's morals clause for the show did not consider DUI charges to be an immoral act, and thus Bumpass was not legally subject to termination.[11] He has been faced with drunk driving charges.[12] 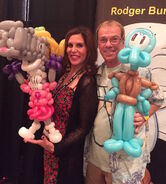 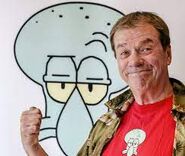