View source
watch 01:35
SpongeBob SquarePants Recap: Rock Bottom
Do you like this video?
Play Sound
This is the page about the episode. For other uses, see Rock Bottom (disambiguation).

"Texas"
"Rock Bottom" is a SpongeBob SquarePants episode from season 1. In this episode, SpongeBob gets stuck in Rock Bottom after taking the wrong bus home.

As the episode begins, SpongeBob and Patrick board a bus in order to get home from Glove World!, a glove-themed amusement park that they enjoy. They accidentally board the wrong bus, which then takes them down a cliff. The cliff leads to a sort of aphotic zone called Rock Bottom, inhabited by multiple unusual and strange deep-sea animals. SpongeBob tells Patrick to wait while he goes to try and find a bus schedule. While SpongeBob is gone searching, Patrick gets on the bus to go home but accidentally leaves SpongeBob behind. SpongeBob tries to find a bus that will take him home but nothing happens.

After several unsuccessful attempts to get on a bus, SpongeBob heads to the bus station and waits in a very long line. By the time he gets to the front, he finds out that the last bus to Bikini Bottom will leave in a few seconds, but before he has time to react, it pulls away from the station.

The Ticketmaster tells SpongeBob that that was the last bus until morning and leaves for the night, shutting off the lights in the process. SpongeBob, who is starting to show fear, takes out his glove flashlight, but the battery shorts out, leaving him in "advanced darkness." As he stands alone in the station giving himself a pep-talk, he hears the familiar raspberry sound echoing and makes a mad dash back to the cliff. The raspberry sound is getting closer, and SpongeBob cowers in fear, yelling out a weak threat. As the creature closes in, a bright light engulfs SpongeBob, and he lets out a scream. He is relieved when he noticed the light is coming from a friendly-looking anglerfish creature who found SpongeBob's lost glove balloon. SpongeBob sarcastically thanks him for solving the balloon problem but begins rambling about his other problem: trying to get home. The anglerfish blows up the balloon and ties it to SpongeBob's wrist. SpongeBob makes another sarcastic comment about how the balloon already has enough air while closing his eyes and blowing raspberries. He opens his eyes to see he is floating in the air and understands the anglerfish was helping him using the unorthodox method of balloon travel. He thanks the anglerfish for his help, who replies with a polite "you're welcome" and waves goodbye.

SpongeBob is able to take the currents back to Bikini Bottom and directly to the front of his house. After he lands the balloon pops and the episode ends with Patrick, riding on a bus back to Rock Bottom thinking SpongeBob is still stuck there. 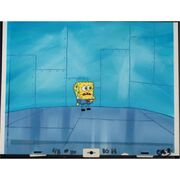 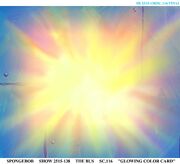 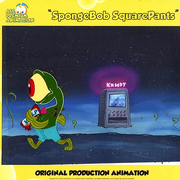 Background from Pickles, but SpongeBob is from this episode. 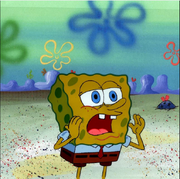 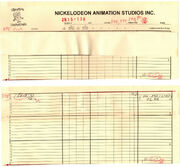 An exposure sheet for this episode. 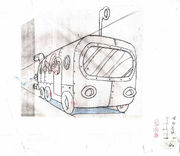 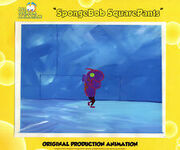 *On The Complete 1st Season and The First 100 Episodes DVDs, "Mavericks" is replaced with "El Dementia" by The Surfdusters while on the Amazon Prime Video version of this episode has the "Mavericks."