Revenge of the Flying Dutchman is a SpongeBob SquarePants video game for the PlayStation 2, Nintendo GameCube, and Game Boy Advance, PC (cancelled)

After getting the stick, SpongeBob tells Gary to fetch his "favorite fetching stick." However, Gary brings back a chest. SpongeBob opens the chest only to find a series of consecutively smaller boxes. Eventually, he discovers a bottle which he opens and unwittingly releases the Flying Dutchman (note that this doesn't fit in with the show's plotline).

The Dutchman starts hypnotizing the citizens of Bikini Bottom to join his ghostly crew with an object of their desire, leaving SpongeBob to save them and defeat the Dutchman by himself.

SpongeBob is walking Gary through Jellyfish Fields when he suddenly smells Snail Nip and runs away. SpongeBob chases after him through an empty area near his own house, encountering Patrick and Squidward along the way. This level serves as the tutorial.

After completing a path through a cave, SpongeBob finds Gary, along with a large treasure chest. He opens it, revealing a series of smaller chests and eventually a bottle, which releases the Flying Dutchman. SpongeBob mistakes him for a genie, much to the Dutchman's annoyance.

After failing to tell him of his ghostly nature, the Dutchman agrees to give SpongeBob a wish if he can find his ten hidden treasures around Bikini Bottom, along with his doubloons.

Throughout Bikini Bottom, SpongeBob can find changing tents that allow him to change clothes, which give him new abilities to assist him on his adventure. These costumes are:

SpongeBob has a completely different move set, now only capable of jumping, gliding, crawling, blowing bubbles in various directions, and eventually collecting gadgets to use. Bubbles can be used to trap jellyfish for use as platforms and stunning enemies. Multiple different Bubble Soaps can be found through levels, each with different functions.

Gadgets can be collected through the third level of a chapter, known as Special Challenge.

The game has a total of seven expansive worlds for SpongeBob to explore, each one unique in its own way. Some were inspired by already-existing locales, such as Bikini Bottom and Goo Lagoon. Others, however, were new to the SpongeBob SquarePants universe and were first introduced in the game, such as Chum World and the Flying Dutchman's Graveyard. Below is a list describing all seven areas:

Bikini Bottom is still explored, though instead of a hub world, the game is separated into chapters, each one containing three levels: a special challenge and a boss fight. Before SpongeBob can collect a treasure, he must first find three colored keys. Below is a list describing all of the GBA versions areas.

Sub Levels: Levels also contain extra challenges known as Jellyfish Rodeos, in which SpongeBob can attempt to get an extra pair of underwear (an extra hit) by collecting doubloons while riding a Jellyfish. 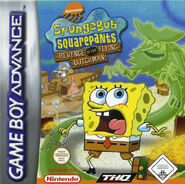 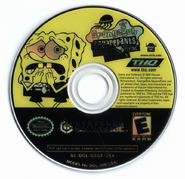 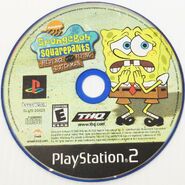 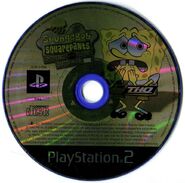 Retrieved from "https://spongebob.fandom.com/wiki/Revenge_of_the_Flying_Dutchman?oldid=1996147"
Community content is available under CC-BY-SA unless otherwise noted.