After getting the stick, SpongeBob tells Gary to fetch his "favorite fetching stick." However, Gary brings back a chest. SpongeBob opens the chest only to find a series of consecutively smaller boxes. Eventually, he discovers a bottle which he opens and unwittingly releases the Flying Dutchman (note that this doesn't fit in with the show's plotline).

The Dutchman starts hypnotizing the citizens of Bikini Bottom to join his ghostly crew with an object of their desire, leaving SpongeBob to save them and defeat the Dutchman by himself.

SpongeBob is walking Gary through Jellyfish Fields when he suddenly smells Snail Nip and runs away. SpongeBob chases after him through an empty area near his own house, encountering Patrick and Squidward along the way. This level serves as the tutorial.

After completing a path through a cave, SpongeBob finds Gary, along with a large treasure chest. He opens it, revealing a series of smaller chests and eventually a bottle, which releases the Flying Dutchman. SpongeBob mistakes him for a genie, much to the Dutchman's annoyance.

After failing to tell him of his ghostly nature, the Dutchman agrees to give SpongeBob a wish if he can find his ten hidden treasures around Bikini Bottom, along with his doubloons.

Plot for the Console version

After getting the stick, SpongeBob tells Gary to fetch his "favorite fetching stick." However, Gary brings back a chest. SpongeBob opens the chest only to find a series of consecutively smaller boxes. Eventually, he discovers a bottle which he opens and unwittingly releases the Flying Dutchman.

After the Dutchman takes away the bottle to prevent him from being sealed up again, he decides to make SpongeBob a member of his bloody crew. But when he learns that Gary was the one who had dug him up, the Dutchman decides to take him instead.

While SpongeBob tries to find a way to save his friend, he goes around Bikini Bottom doing all sorts of tasks such as helping Patrick fix his antenna and getting his Jellyfishing Gear. SpongeBob also finds letter tiles that spell his name. If he finds all 9 tiles, he gets transported to the inside of his head and solves a picture slide puzzle that reveals the location of a treasure chest.

After solving the first puzzle, he gains a treasure-hunting outfit with a treasure-tracking stick that helps him find the treasure. The first treasure he finds is a dirty sock (possibly the dining sock from "Shanghaied").

Meanwhile, as SpongeBob was returning home, The Flying Dutchman had come to take Gary away! He hypnotizes him using a golden stick on a fishing rod. When SpongeBob returns home, he was too late to save his pet snail.

Looking for help, SpongeBob goes to see Squidward, who informs SpongeBob that Mr. Krabs of the Krusty Krab wants them to come over for an important announcement. Hoping that it's for the position of Employee of the Month, SpongeBob and Squidward race to the Krusty Krab to see who would get there first.

But no matter who got there first, Mr. Krabs tells his employees that due to slow business, he had to shut down the Krusty Krab. While Squidward heads back home to find a way to pay his bills, SpongeBob tries to cheer up Mr. Krabs by suggesting to bring the restaurant to the customers. That was when Mr. Krabs got an idea: They would do just as SpongeBob suggested.

After giving SpongeBob a bus ticket for Downtown Bikini Bottom, the two meet up for a special food delivery service sponsored by the Krusty Krab. SpongeBob delivers Krabby Patties to customers all throughout the city. First in the main town, then at a construction site, then at the high rise apartments and then through a time-limited task back in town.

But while SpongeBob made his last delivery, he discovers that Patrick was also delivering food from Mr. Krabs... but his outfit doesn't look like it was from The Krusty Krab. When SpongeBob tells Mr. Krabs of this matter, he suggests that SpongeBob follows Patrick until he finds out what's really going on.

But as SpongeBob returns to the Bikini Bottom Residence, Mr. Krabs returns to the Krusty Krab where the Flying Dutchman makes him another member of his bloody crew!

Back in Bikini Bottom, SpongeBob follows Patrick he arrives at the Chum Bucket, where he is greeted by a robot-version of Mr. Krabs. But as it turns out, the one who was responsible for causing slow business at the Krusty Krab was none other than Plankton, who had formulated a new plan to put Mr. Krabs out of business by opening up a new theme park: Chum World. With his work done, Plankton flees to Jellyfish Fields.

After buying a present for Sandy at Squidward's yard sale, SpongeBob learns of a book entitled, "How to Defeat Evil Spirits." While borrowing the book from Squidward when he's asleep, SpongeBob learns that the only way to break the Flying Dutchman's spell is to find all 7 of his most personal treasures (The Dirty Dining Sock is one of them).

His quest now revealed, SpongeBob must gather all 7 treasures to break the spell over his friends and to face down the Flying Dutchman!

Throughout Bikini Bottom, SpongeBob can find changing tents that allow him to change clothes, which give him new abilities to assist him on his adventure. These costumes are:

SpongeBob has a completely different move set, now only capable of jumping, gliding, crawling, blowing bubbles in various directions, and eventually collecting gadgets to use. Bubbles can be used to trap jellyfish for use as platforms and stunning enemies. Multiple different Bubble Soaps can be found through levels, each with different functions.

Gadgets can be collected through the third level of a chapter, known as Special Challenge.

The game has a total of seven expansive worlds for SpongeBob to explore, each one unique in its own way. Some were inspired by already-existing locales, such as Bikini Bottom and Goo Lagoon. Others, however, were new to the SpongeBob SquarePants universe and were first introduced in the game, such as Chum World and the Flying Dutchman's Graveyard. Below is a list describing all seven areas:

Bikini Bottom is still explored, though instead of a hub world, the game is separated into chapters, each one containing three levels: a special challenge and a boss fight. Before SpongeBob can collect a treasure, he must first find three colored keys. Below is a list describing all of the areas of this version:

Sub Levels: Levels also contain extra challenges known as Jellyfish Rodeos, in which SpongeBob can attempt to get an extra pair of underwear (an extra hit) by collecting doubloons while riding a Jellyfish.

The game received mixed to negative reviews. Metacritic gave the GameCube version a 66 out of 100,[1] and the Game Boy Advance version a 71 out of 100.[2] IGN gave the game a 4/10 on the PlayStation 2 version, criticizing the game's sluggish controls, annoying music tracks, terrible graphics, frequent and obnoxious loading screens, simplistic gameplay, and somewhat tedious fetch quests calling it a "chore."[3]

While the game's reception was mixed and negative, the Game Boy Advance version had sold 740,000 copies since August of 2006 and was ranked at #31 on Edge's magazine's list of "The Century's Top 50 Handheld Games," calling it "yet another mediocre game that sold brilliantly because of the sponge on its cover."[4]

Main article: List of early versions of video games#Revenge of the Flying Dutchman

The GameCube version was planned to have a connectivity feature with the Game Boy Advance, but this was scrapped later on. The voices for the narrator mentioning this feature can still be found in the files of this game.[5]

Animation and sound effect for an unused Whirlpool attack for the Mermaid Man costume exist in the file alongside an unused line from the narrator explaining the attack. A model of a golden SpongeBob statue exist in the files suggesting that it could've been an extra life.

All versions of the game has backward compatibility on the following systems: 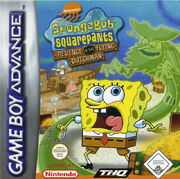 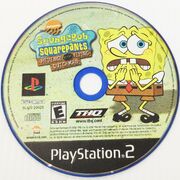 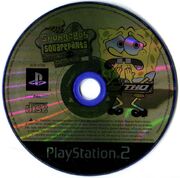 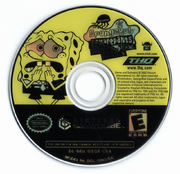 Print advertisement for this game