Start a Wiki
If you were looking for the article about the machine, then see Reef blower (machine).

"Reef Blower" is a SpongeBob SquarePants episode from season one. In this episode, SpongeBob attempts to move a shell off of his lawn.

One sunny day, Squidward walks outside, and looks upon his immaculate front lawn, free of debris, except for one tiny pink shell. Finding its presence unsightly, he nonchalantly kicks it onto SpongeBob's lawn. The latter pops out of his window and sees the shell. Also keen to keep the appearance of his lawn pristine, he gets his reef blower out of his garage and turns it on. The noise annoys Squidward, who plugs his ears as SpongeBob struggles to blow the shell away.

After a few failed attempts, SpongeBob applies more force and accidentally blows a large pile of sand onto Squidward and his lunch. To fix this problem, he blows the sand off Squidward first, then his plate of kelp, but gets some sand in the latter's eyes. After clearing Squidward's face, SpongeBob peers over at his sidewalk and the pile of sand is now atop it.

More determined to clean his yard than ever, SpongeBob sucks the pile of sand into the reef blower. The yard is cleared, but the blower malfunctions and spits out the sand along with a few mechanical parts. Undeterred, SpongeBob unzips the reef blower and puts the debris in himself. Upon trying to restart the machine, however, it fails to operate.

SpongeBob takes the starter rope and pulls it as far as it can possibly go. Once stretched to its limit, SpongeBob lets it yank him back and the motor restarts. The resulting suction proves so great that it vacuums up all the water in the ocean, leaving Squidward to start suffocating. The engorged reef blower soon bursts, releasing all the water and a large amount of sand.

With his yard miraculously clean, SpongeBob heads back inside, leaving Squidward to his fate: his yard covered in sand piles, buried under one himself, and the tiny shell falling gently onto his nose. 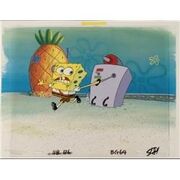 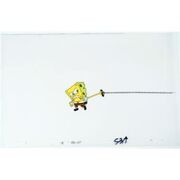 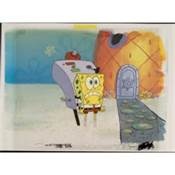 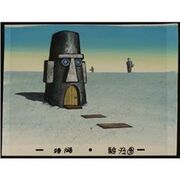 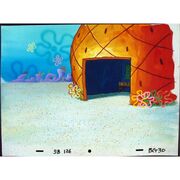