"Sanctuary!"
"Pull Up a Barrel" is a SpongeBob SquarePants episode from Season 9. In this episode, Mr. Krabs tells SpongeBob tales from his old navy days.

The episode starts at the Krusty Krab, where Squidward is eager to leave early. By then, a defective storm dashes upon Bikini Bottom, and the Krusty crew is stuck inside the building. Until then, Mr. Krabs decides to share one of his stories about a time when a gusty wind tossed around his cargo ship. Mr. Krabs was cooking up some food for his crew, and during his cookery, Captain Scarfish burst into the kitchen telling Mr. Krabs to refrain from making delicious food, and to keep the crust on the bread. He was explaining to him that he has a cargo load full of sun tan lotion. Soon into the story Mr. Krabs brings in a load of slob for the hungry fish.

After seeing the poorly looking fish eating the slob, Mr. Krabs determines to turn the nourishment into a tasty treat, which gets seen by the captain, who decides to send him to jail. After sharing about his horrible journey to prison, Mr. Krabs gives the foolish guard an assignment to make a cathedral of cotton candy so that he can snatch a piece while he is distracted and form a key to unlock the cell. At that moment, Mr. Krabs made a wise decision until he sees that the jail is being under hostage by the pirates. He knew he had to act fast, so he unlocked his way out and told the crew to wake up.

The pirate is put behind bars, and Mr. Krabs gives her a pie with a key molded from cotton candy.

The episode ends with Mr. Krabs and SpongeBob continuously winking at each other, which deeply annoys Squidward. 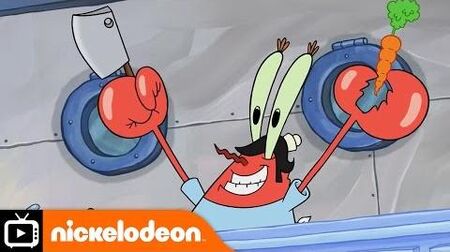 Retrieved from "https://spongebob.fandom.com/wiki/Pull_Up_a_Barrel?oldid=3442693"
Community content is available under CC-BY-SA unless otherwise noted.