Potty the Parrot is Patchy the Pirate's pet parrot. Potty is a crudely made puppet with very obvious strings. He is very obnoxious, and normally annoys and talks back to Patchy. Potty was originally portrayed by Stephen Hillenburg. After his departure, Paul Tibbitt was given the role.

Potty is the cohost of Patchy the Pirate, and appears in every episode that features him. Despite being labeled as Patchy's and friend, Potty is a frequent pest to Patchy and is often an antagonist in his live-action segments, although they usually make up by the end of the episode. His rivalry with Patchy the Pirate is similar to Bucky B. Khatt and his owner from the popular comic strip Get Fuzzy. 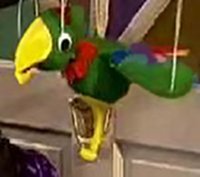 In "Ugh," Potty ruined Patchy's Cave Man Show by becoming a futuristic cyborg and bringing in a robot. At the end of the show, Potty gives Patchy a pet T. Rex as an "apology present". In "Friend or Foe" Potty and Patchy get into a fight while working as fry cooks, temporarily ending their friendship, which makes Patchy upset. He compares this to how Plankton and Mr. Krabs became enemies, starting the main story of that episode.

Potty has been damaged and/or destroyed on multiple occasions, but always returns in the next scene/episode. In "Christmas Who?" Patchy cuts the strings that Potty is attached to, causing him to fall to the ground. Later in that same episode, Patchy pulls on the strings, causing what seems to be a cast member to fall from the ceiling. Again in the same episode, Potty had eaten so much cookie dough that his entire body falls from the weight, leaving only his head intact. At the end of the "Patchy's Pick" segment from "Shanghaied", Potty is blown up by dynamite, which again causes his whole body to fall, including his head.

Start a Discussion Discussions about Potty the Parrot