View source
If you were looking for the article about the music track, then see Porous Pursuit.

"SpongeBob SquarePants vs. The Big One"

"Choir Boys"
"Porous Pockets" is a SpongeBob SquarePants episode from season 6. In this episode, SpongeBob becomes popular after obtaining a large amount of wealth, which changes his personality.

SpongeBob is in Jellyfish Fields when he hears a loud shrieking. He thinks that it is Patrick, but it is actually a clam choking on a pearl. The clam coughs up the pearl with Patrick's assistance, and Patrick thinks that it is a volleyball. The two take the pearl to the local volleyball court, where someone offers SpongeBob a "small fortune" for it. The "small fortune" turns out to be billions of dollars that are delivered to SpongeBob's house by several trucks.

SpongeBob and Patrick use a portion of the money to buy lifetime supplies of strawberry gum at the mall. Later, at an ice cream stand, SpongeBob overhears another fish complaining that he is short on change, so he offers the fish money, and they become his friends. SpongeBob is so overtaken by fame that he forgets that Patrick is his best friend. He keeps giving money to his rich "friends."

The next time Patrick sees SpongeBob, he has turned his pineapple into a huge golden mansion. SpongeBob's butler will not allow Patrick in, so Patrick tells him his shoe is untied and slips past him. Inside, SpongeBob is wearing fancy, expensive clothes and is telling jokes to his new friends, and handing out money to anyone who asks for some. Patrick tries to warn SpongeBob that everyone is just using him and that if he keeps throwing away his money he will not have any, but is cut off by Mr. Krabs who kicks him out. Eventually, so many people have used him for his money that SpongeBob runs out completely. He searches both pockets, his safe, his closet, even his toilet, but there is no money left. SpongeBob tells everyone this and they all leave immediately, except Mr. Krabs, who reminds him not to be late for work tomorrow.

SpongeBob returns to his normal life, and he apologizes to Patrick for not listening to him. Patrick takes it in stride and tells SpongeBob that greed is not good. Patrick finds another "volleyball," which is really a huge diamond from the Bikini Bottom Diamond Mine while the episode ends. 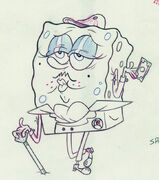 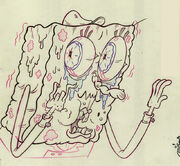