Plankton Gets the Boot

View source
This is the page about the season 10 episode. For other uses, see Plankton (disambiguation).

"Life Insurance"
"Plankton Gets the Boot" is a SpongeBob SquarePants episode from season 10. In this episode, Karen kicks Plankton out of the Chum Bucket, leaving it up to SpongeBob to teach Plankton how to make it up to her.

The episode begins at the Chum Bucket, where Plankton is making his final touches to the Analyzer. Karen tells him about her new screensaver, but Plankton ignores and then disagrees with her new screensaver. He accidentally gets sucked up by the Analyzer, and then is shown to be "30% mean guy, 20% spiteful monster, 50% evil butt-head" and concluded to be "100% big jerk" by the machine. Molecular Analyzer also praises Karen's new screensaver. Annoyed by the machine, Plankton destroys it. Karen gets so fed up with her husband for not talking appropriately to her that she kicks him out of the Chum Bucket, as well as shutting the doors completely to him.

Plankton visits Mr. Krabs and Pearl's house, only for his house's door to be slammed closed. Plankton then suddenly meets SpongeBob. The latter invites the former to stay with him, but Plankton does not want to, though he soon reluctantly agrees after knowing that he needs a place to stay. SpongeBob is happy to see that Plankton can stay at his house, and watches a romantic movie. Plankton then looks at his portrait of Karen and him, which makes him feel sad. SpongeBob tells him that everything will be alright, and calmly talks to Plankton about his issues. Plankton admits he is a mean person and wants to change, not mentioning he that called the screensaver fat.

Outside SpongeBob's house, Plankton tries to do a good deed to Patrick to open the door for him, but it backfires because he is too small to reach the normal-sized door's doorknob and that Patrick is too large to fit into the tiny door that Plankton is able to open by himself. Plankton gets angry of that, so SpongeBob tells Plankton to try something else.

Back in SpongeBob's house, SpongeBob tells Plankton to say something nice, since it appears difficult for him to do something nice, due to size limitations. It backfires when Patrick admires Plankton's antennae, interpreting that "mocking" about his antennae was insulting.

Back outside, SpongeBob tells Plankton about "working on his terrible outsides," since Plankton has typical bad characteristics that he cannot change from the inside. SpongeBob tries making makeovers for him, but does not like the idea of it. Plankton then suggests the idea of SpongeBob to disguise as a robot.

Karen tells Plankton that Shelby Nautica is his, which then SpongeBob is joyful to the fact that Karen no longer loves Plankton. Plankton then angrily tells SpongeBob that his goal was to get Karen to still love him. Karen apologizes to Plankton about her angry attitudes, and allows him to kiss her. She turns on the same screensaver as previously seen, and Plankton is disgusted by it, calling it a "fat screensaver." Karen gets angry at Plankton again for talking inappropriately to her and proceeds to attack Plankton and kicks him out of the Chum Bucket again, as the episode ends. 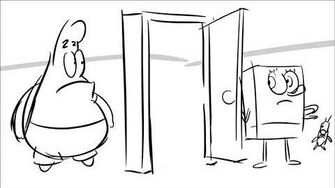 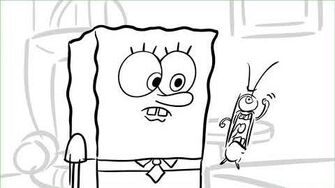