"Stormy Weather"
"Plankton's Old Chum" is a SpongeBob SquarePants episode from season 12. In this episode, when Plankton's usual spot to dump his rotten chum is too full, he tricks SpongeBob into hiding it around the city.

In the beginning of the episode, Karen and Plankton are counting down to when the chum goes bad. Then, Plankton drives a huge barrel of old chum to the place where he usually dumps it, but when Plankton opens it, he realizes that it is already filled to the top, so he begins to look for other places. He tries the well, but it is also clogged.

Along the way, Plankton accidentally stumbles upon SpongeBob, who is walking with Gary. SpongeBob spots a barrel of chum and asks what it is for. Plankton replies that it is for a holiday called Chum Day. On this day, the fish supposedly give each other chum. Then SpongeBob agrees to help Plankton make "gifts" in the city, much to his delight. The two of them go to Mr. Krabs' house, where they pour chum under the carpet. Then they start to spread chum everywhere until they finally say goodbye.

On the way home, SpongeBob sees that the streets of Bikini Bottom are flooded with chum. The angry residents quickly run to Plankton and want to beat him, but SpongeBob, in a Santa hat, starts to tell and sing about the day of chum. Then the fish are happy and proceed to celebrate, but the sanitary inspector gives Plankton a fine and forces him to eat all the spilled chum for the safety of the citizens, as the episode ends. 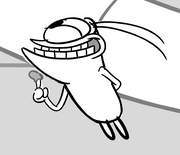 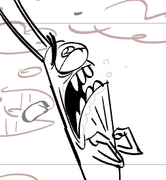 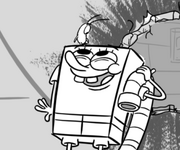