View source
This is the page about the season 3 episode. For other uses, see Plankton (disambiguation).

"The Sponge Who Could Fly"
"Plankton's Army" is a SpongeBob SquarePants episode from season 3. In this episode, Plankton enlists the help of his relatives to steal the Krabby Patty formula.

Mr. Krabs announces to his employees that it is the twenty-fifth anniversary of Plankton's first attempt to steal the Krabby Patty formula. A robot suddenly enters the restaurant and orders chili coral bits. After Mr. Krabs takes the robot's money, Plankton jumps out of the dollar bill and demands the formula, only for Mr. Krabs to flush him down the toilet.

Plankton sadly returns to the Chum Bucket and Karen suggests hiring some henchmen to help him. After trying and failing to recruit some thugs at a nightclub, Plankton remembers that he has thousands of relatives across the sea and invites them all over to the Chum Bucket, imagining them all to be evil geniuses like he is. However, when they arrive, he sees that they are all dimwitted rednecks, and realizes that he has "been away from home longer than [he] thought." Once his cousin Clem reintroduces Plankton to all his relatives, Plankton calls them to a meeting and explains his plan, promising them all the root beer they can drink if they help.

Just as the Krusty Krab is about to close, Plankton and his relatives come charging in. After trapping Mr. Krabs, they open the safe containing the Krabby Patty secret formula. Plankton takes it out of the safe and Mr. Krabs begs him not to read it, telling him, "There's some things in this world that weren't meant for mortal eyes!" Plankton refuses to listen and reads out the formula anyway:

Horrified, Plankton runs out of the Krusty Krab and back to the Chum Bucket, screaming at the top of his lungs, and his relatives follow suit after reading the recipe (except for Clem, who is illiterate; Mr. Krabs sends him off). Mr. Krabs tells his employees that the formula Plankton read is just a fake, and that Plankton will most likely figure this out and come back for the real one. He gloats that the real formula is hidden somewhere where nobody, not even Plankton, will be able to find it. Squidward then correctly guesses that it is at Mr. Krabs' house under his mattress, and Mr. Krabs runs home, yelling, "Curse you, Squidward!" 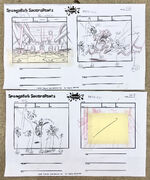 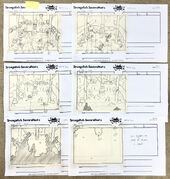 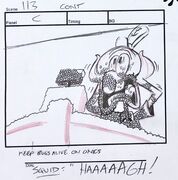