View source
This is the page about the season 1 episode. For other uses, see Plankton (disambiguation).

Alex the Labrador Retriever as himself

"Naughty Nautical Neighbors"
"Plankton!" is a SpongeBob SquarePants episode from season 1. In this episode, SpongeBob is introduced to Mr. Krabs' business rival, Plankton, who controls his brain in attempt to obtain the Krabby Patty formula.

The episode opens at the Krusty Krab. Squidward sends SpongeBob an order for a Krabby Patty, which through a sleight-of-hand trick SpongeBob performs seems to come out through Squidward's nose. After SpongeBob makes the patty, however, it begins to move seemingly on its own and makes its way towards the front door. Mr. Krabs stops the patty in its tracks and reveals that the patty was being stolen by none other than Krabs' diminutive nemesis, Plankton. Krabs places his foe on a plate and flings him back to the Chum Bucket across the street while Plankton exclaims that he will return. Mr. Krabs explains to SpongeBob that Plankton is his arch-competitor, and has been trying and failing to steal the Krabby Patty secret formula for an untold amount of years.

Later that night, after the Krusty Krab closes, SpongeBob says goodbye to Mr. Krabs and leaves. On his way home, Plankton stops SpongeBob and tries to convince him that he and the fry cook are somehow friends (or should be since they are both invertebrates), and that as such SpongeBob should come to Plankton's birthday, which he claims is the following day. Plankton gives SpongeBob a golden spatula and says that, "friends give each other gifts." SpongeBob then guesses that Plankton would like a booster seat. Plankton sounds happy with this proposition, but declines. Plankton tells SpongeBob that, for his birthday, he wants SpongeBob to give him a Krabby Patty. SpongeBob loudly and angrily refuses, citing that Plankton just wants to make friends with him in order to gain access to the Krabby Patty. He also feels sure that Plankton's birthday was not going to even be the following day, and runs back home, refusing to give Plankton a Krabby Patty whether they become friends or not. Plankton, however, refuses to give up and proclaims that SpongeBob will "hand-deliver it to [him] personally."

Later that night, as SpongeBob is sleeping, Plankton maliciously enters his head through a pore and makes his way to SpongeBob's brain. He attaches a mind control device to the brain and hijacks SpongeBob's mind and body, forcing him to walk out of his house and through Squidward's house, where he insults the cephalopod. At this point, SpongeBob realizes that Plankton has hijacked his body and tries to tell him to let him go, but Plankton refuses, laughs sadistically, and makes SpongeBob leave exit the house, leaving Squidward feeling nauseous by what he just saw. After Plankton forces SpongeBob to pass through Patrick's house and tosses him aside, he then forces the sponge into and out of the Krusty Krab where he steals a Krabby Patty. He brings it to an analyzer inside the Chum Bucket, which is designed to figure out the ingredients of whatever is dropped into it. As Plankton cruelly gloats over his victory and begins to force SpongeBob to drop the Krabby Patty, SpongeBob sadly laments his failure to protect it, lovingly describing the Krabby Patty's ingredients and succulence. A hungry Plankton leaps out of SpongeBob's head and onto the Krabby Patty, but bounces off of it and falls into the analyzer, thus trapping himself inside his own computer screen. With his mind and body now freed from Plankton's control, SpongeBob happily walks home with the Krabby Patty in hand, ignoring Plankton's angry demands for him to bring it back, his last plea being, "I'll settle for some fries!" ending the episode shortly after. 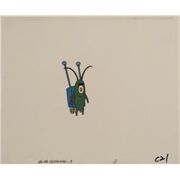 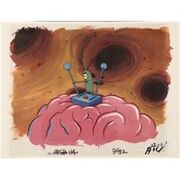 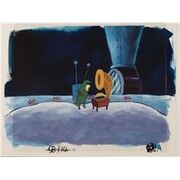 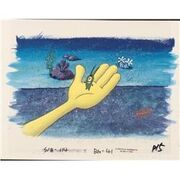 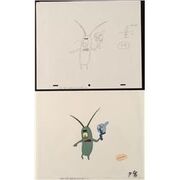 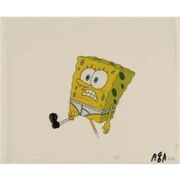 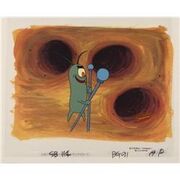 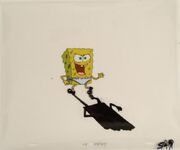 "Get out of my head, leave my brain alone. Never, NEVER." 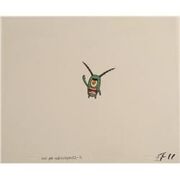 "Gee, and I though you were stupid." 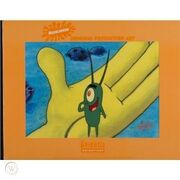 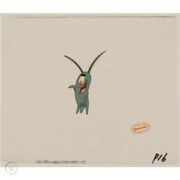 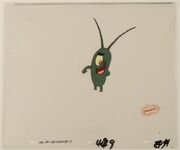 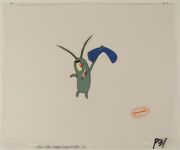 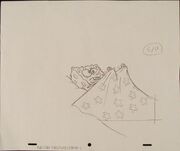 In the audio commentary, Doug Lawrence reveals he won the voice of Plankton in an auditioning contest held at the beginning of production.

The audio commentary also reveals that there was originally going to be a scene involving Squidward being naked (possibly during the scene in his bedroom), but it was cut due to nudity.

Creation of Plankton and Karen

Plankton was first created by Stephen Hillenburg as a potential villain for the show and was included in his series bible in 1996. However, he later feared that Plankton's stories would get repetitive and predictable. During the production of season 1, Hillenburg demoted Plankton from a main character to a minor one; he insisted that Plankton would work better as a one-time guest star.[1] However, Doug Lawrence loved the character. He used his writing and acting skills to prove that Plankton could work as a major antagonist. If Lawrence did not have a dual role as both the voice and writer for Plankton, his character would never have become a major villain.[2]

Doug Lawrence summarized Plankton's origins in 2015, saying that he "was only supposed to be in one or two episodes, but I was a writer on the show and I really liked this character."[1] Following his first voice recording as Plankton, Lawrence wrote some of his own ideas for the character and passed them to Hillenburg.[1] From then on, Plankton began to appear more often.

Karen was first introduced as Plankton's "waterproof computer system" who would be a part of all of his inventions. Karen was named after Karen Hillenburg, the wife of the show's creator, Stephen Hillenburg.[3] She was created by Stephen Hillenburg in 1998, shortly after he married his wife, Karen Hillenburg. Stephen called his wife "the funniest person he knows"[4] and her sense of humor inspired the cartoon Karen's personality. Doug Lawrence helped Stephen Hillenburg develop Karen's character and give her a personality. Her voice is provided by Jill Talley, who is the wife of SpongeBob's voice actor, Tom Kenny. In this episode, she has no discernible personality and essentially operates as a text-to-speech program. In addition, Karen's name is never said out loud in this episode.

Doug Lawrence decided that Plankton and Karen should be an inseparable duo, with Karen as the brains of the operation, always supplying Plankton with evil plans. Lawrence said: "I want more Karen on the show ... The married life of an evil genius is the funniest thing to me, so in that regard [Karen] definitely enhances Plankton’s stories making him more than just your typical bad guy."[5]